When the weekend arrives, most people spend it relaxing, lounging and recovering from a week of hard work, especially for... 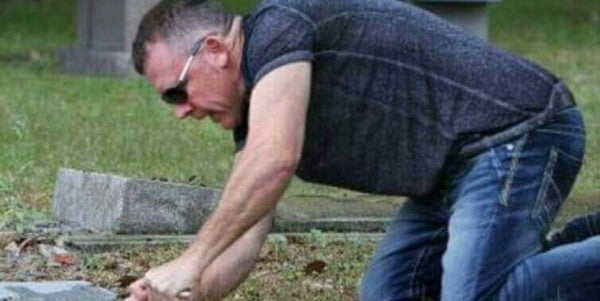 When the weekend arrives, most people spend it relaxing, lounging and recovering from a week of hard work, especially for those who work six days out of the week. But for one 46-year-old business owner, that one day off is spent cleaning the tombstones of veterans.

For the last two and a half years, Andrew Lumish has spent every Sunday cleaning the gravestones of veterans in three different cemeteries in Tampa, Florida where he lives. The owner of a cleaning franchise, Lumish goes by the handle The Good Cemeterian on social media, where he posts photos of the more than 300 headstones he’s cleaned, along with details of the veterans buried there, according to the Tampa Bay Times.

Lumish, whose other hobby is photography, was out at a cemetery in 2015 taking photos when he was struck by the state of disrepair of the headstones. They were covered in decades of dirt and grime, and many of the gravesites belonged to veterans.

That didn’t sit right with him.

“They'd been neglected from the time they'd been buried,” Lumish told the Times. “Their final resting places were total disasters.”

Lumish went home, did some research on how the tombstones are cleaned at Arlington National Cemetery, bought the proper equipment — a soft brush and a biological cleaning solution — and has spent every Sunday since restoring gravestones.

For each marker Lumish cleans, he also takes time to research who is buried there, and tries to imagine how their families would feel if they could see the graves in the state they’re in.

Lumish has even taken to providing instructions for other “good cemeterians” who want to help restore the headstones at their local cemeteries.

Though Lumish’s volunteer work has gotten a great deal of media attention recently, for him, it’s all about drawing attention to those buried under the stones he cleans.

“They fought for the freedoms that you and I enjoy today,” Lumish told the Times. “If I know that they did these things for my future, my children's future, and I see that they're forgotten, I feel a sense of responsibility to give their family a little bit of light.”