Badass Female Pilots Team Up To Take On Cancer

Six years ago, 31-year-old Swedish pilot Emelie Bonin was given the kind of devastating news that every human being dreads.... 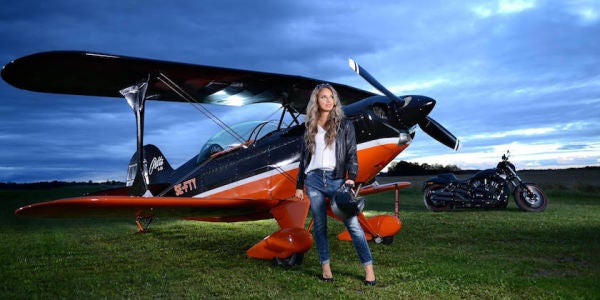 Six years ago, 31-year-old Swedish pilot Emelie Bonin was given the kind of devastating news that every human being dreads. She was told she had cervical cancer — a potentially fatal disease that stole the lives of nearly 270,000 women around the world in 2012. But last year, she received a diagnosis that all cancer patients and their loved ones desperately hope for: After a years-long fight, she was in remission.

To celebrate the end of her five-year battle and the beginning of her new life as a survivor, Bonin wanted to give something back.

“I wanted to celebrate this big step on my journey to being fully recovered,” she explained in an interview with Task & Purpose. Instead of popping champagne or embarking on a luxurious vacation, Bonin and her friend, fellow Swedish pilot Susanna Sundberg, wanted to celebrate by supporting a cause near and dear to their hearts.

The two women decided to raise money for cancer research, and they wanted to do it by showcasing a passion they believe too few women are involved with: aviation.

“We’re both pilots, and we wanted a team of female pilots to be seen… because there aren’t a lot of female pilots!” Bonin recalled. Armed with a love of flight, a desire to fight, and a formidable presence on Instagram, the duo came up with a concept to incorporate all of these elements into one project: a calendar showcasing female pilots from around the world.

Bonin credits Sundberg, whose boyfriend struggled with cancer last year, for conceptualizing the the AviatrixArt calendar. Once they had their idea in mind, the two wasted no time.

“We were determined. We said, ‘we’re gonna do this!’” Bonin explained. She and Sundberg hired a photographer and found some hangars and aircraft in Marseilles, France, that they borrowed for the 2016 calendar. Once they locked down the location, Bonin and Sundberg started searching for female pilots through social media.

The 2017 edition — which was shot in Antwerpen, Belgium — includes 13 women from 10 different countries including Sweden, Iceland, the United States, India, Turkey, England, Austria, Belgium, Sri Lanka, and Qatar. The women, who all have a unique connection to cancer, mostly fly commercial aircraft such as the Boeing 737. Others fly small single-engine propeller planes, and one of the women, an American, flies a Black Hawk helicopter.

Chief Warrant Officer 2 Latifa Gaisi is a UH-60 pilot in the U.S. Army National Guard. She became interested in the AviatrixArt Calendar earlier this year when she was tagged by several friends in the open-model calls for female pilots on Facebook and Instagram.

“I figured, what the hell, the worst thing they could do is say no,” Gaisi told Task & Purpose, “but on April fool's day I got an acceptance email!”

Gaisi says she “fell in love with how passionate the founders were” about this project, and that the calendars turned out better than she could have imagined. “The calendars are all so tasteful and elegant — they really give the cause they're fighting for the level of esteem that it deserves.”

While memorializing those who live only in past, Bonin and her team are keeping an optimistic eye toward the future — they hope to continue this project for as long as they can. Their goal is to give cancer the finger while simultaneously “inspiring future pilots around the world to pursue their dreams!” according to Bonin.

The 2017 AviatrixArt calendar can be purchased here for $20 and will be officially released on Oct.15. All proceeds will be donated to the Swedish Cancer Society, an independent nonprofit organization with the vision of finding cures for cancer around the world.