We Need To Talk About The Healthcare Promises Made To Vets

The U.S. Department of Veterans Affairs is in trouble and under attack. This shouldn’t be groundbreaking news to anyone — … Continued 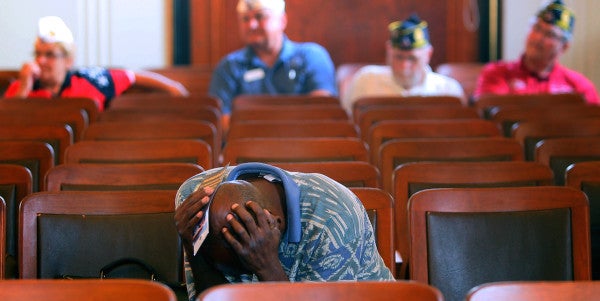 The U.S. Department of Veterans Affairs is in trouble and under attack. This shouldn’t be groundbreaking news to anyone — it has been for a long time. With the release of the final report from the Commission on Care — the blue-ribbon panel established to make recommendations to improve VA healthcare services — more fodder has been given to critics who seek to privatize much of how VA serves patients. The report was released last week and much of what it offers is old news — essentially, it serves to give ammunition to viewpoints already held by different stakeholders.

The Koch brothers-funded Concerned Veterans for America believes the final report doesn’t go far enough to privatize VA health care. The American Federation of Government Employees believes the report goes much too far, claiming it will “…destroy the veterans’ healthcare system…”. Disabled American Veterans agreed with some parts of the report, while also expressing concerns about proposals that would privatize some VA healthcare functions. These three perspectives are mostly remarkable for how unremarkable they are, following up on previous statements made by each organization before the report was even released.

What the report has not provided is a robust and beneficial conversation about how much service veterans deserve when it comes to their health care, and how much funding we as a nation are willing to provide to meet those care needs. While the report opens with an acknowledgement that VA health care is often superior in clinical quality to its private sector counterpart, it goes on to attempt to address the main issues that have prompted reform; namely access, inconsistency, and inefficiency.

The most contentious recommendation is also the first in the report: the establishment of a “VHA Care System” to coordinate service through networks of private sector healthcare providers. This recommendation alone has the potential to siphon off large amounts of funding from the VA if implemented in full. Yet the idea that large amounts of specialized providers exist in the areas where access is most challenging is a fantasy. Reports have shown consistently that a shortage of doctors exists relative to demand in rural areas. As recent articles have noted, the more specialized a doctor is in an important field like neurology — an essential field given the numbers of brain injuries sustained by post-9/11 veterans — the less likely they are to establish a practice in a rural community where access needs are greatest. While the Commission on Care report acknowledges the existence of this shortage, it does nothing to address the problem itself.

Indeed, VA has already focused resources and attention on these underserved areas. It has also implemented portions of the Choice Act that seek to cover veterans who need access to care that can be provided faster from the private sector. Finally, VA developed and began implementing a plan long before the Commission on Care’s final report to revolutionize the way service is delivered across the entire department.

But establishing a VHA care system to push veterans into private sector health care does not create additional doctors where not enough exist. Siphoning off funds from the current VHA system into private care could have the unintended consequence of reducing quality for the patients that remain under VA’s charge. And shoving more veterans into the private sector removes them from an organization that consistently delivers care that equals or exceeds patient satisfaction from its counterparts.

What is needed — in addition to continued efficiency improvements at VA — is a more honest public debate surrounding the affordability of healthcare promises made to veterans. If VA is expected to provide quick access to the highest quality care close to every single place a veteran may live, how are they supposed to do so without an overwhelming increase in funding? If that is not the expectation for one agency to tackle, how does draining existing funding from the VHA system help the patients that remain receive the quality of care we want them to continue to enjoy?

The disparity between the expectations leveled upon the VHA system and the possibilities inherent with current funding is not solved by privatizing VA health care, as some have suggested. Nor is it solved by establishing a VHA care system that pushes more veterans into the private sector. Only a measured debate based in the reality of what’s possible — combined with additional improvements in efficiency and management structure — can result in the outcomes of most veterans receiving fast, high-quality care with consistency.