Think Your Absentee Ballot Doesn’t Matter? Here’s Proof It Does

History is made by those who show up, the old cliche goes. For modern political life, the message is clear:... 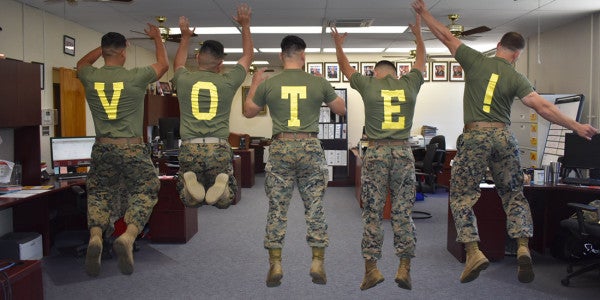 History is made by those who show up, the old cliche goes. For modern political life, the message is clear: Every vote matters, so long as you actually take the time to cast it. Indeed, modern U.S. government is full of examples of a few votes — or a single vote — making all the difference:

Every vote matters. More to the point, your vote matters — no matter where you are on Election Day, from Port Hueneme to Paktia province. But just as a mighty army is only as good as its lines of supply, your vote only counts if you get it to the right place at the right time. Here’s a quick primer on how to make your absentee vote count, wherever you’re stationed, in two steps and two deadlines:

Step 1: Get registered and request your ballot

Most states require you to register to vote well in advance of the election in which you want to cast an absentee vote. The easiest way is to use a Federal Post Card Application. It’s a good idea to send in an FPCA at the beginning of every year, as well as when you move.

The FPCA can be filled out online, then downloaded and printed, or picked up in hard copy from your Voting Assistance Officer. Once you fill out the form, sign it and send to your election office. The PDF and hard copy even include a pre-addressed and postage-paid label — so you don't have to worry about finding stamps.

Step 2: Receive, fill out, and send back your ballot

If everything is hunky dory and you receive your ballot before the election, now you just have to fill it out. (If you don’t receive yours in time to vote, you can use the Federal Write-In Absentee Ballot, a backup ballot that can be completed online or picked up in hard copy from your Voting Assistance Officer.)

The voting process from here is pretty straightforward — with clear instructions printed on your absentee ballot itself. Just fill it out, sign it where required (don’t forget this step!), and send it back. If you received your ballot by email or another electronic method, it should also come with instructions on how to fill it out and send it back.

How do you know your vote got counted, though?

One of the prime reasons why deployed service members fail to exercise their voting rights is they assume that absentee ballots get delayed, lost, or “forgotten” somewhere along the way. Thankfully, we’re in the 21st century now, so it’s pretty easy to see if your ballot made it into the tally: You can check the status of your ballot after sending it back.

How long do I have to do all this?

Good question! Election Day this year falls on November 6. But voting absentee means you have to do things earlier than everyone else. Check with the Federal Voting Assistance Program or your Voting Assistance Officer to get the deadlines that apply to you:

Every day, you get up to support and defend the Constitution. But don’t forget that the Constitution supports and defends you, too: The right to have your vote counted is what America’s all about. If you have questions about how to exercise that right, you can get answers from the Federal Voting Assistance Program at FVAP.gov.