Veteran Caregivers Can Be Men, But No One Recognizes That 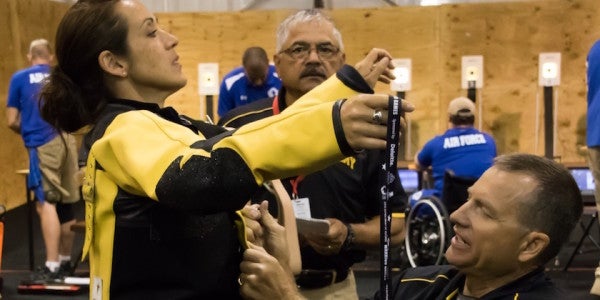 In late September, the Elizabeth Dole Foundation launched a new nonprofit initiative called Hidden Heroes, a resource network and fellowship program intended to recognize the underappreciated contribution of those who care for physically and psychologically disabled veterans. At the launch gala, actor Tom Hanks introduced the program and noted, “By military caregivers … we’re talking about wives, and family members, and girlfriends, and kids, and parents.”

Caregivers to veterans give time, energy, and resources for little credit. Many of them are women, but what about the nearly half of caregivers who are men: husbands, boyfriends, and male friends who care for disabled veterans?

Hidden Heroes was not alone in their attention to a homogenous group of caregivers: The VA’s “Caregiver Connections” pages only tell the stories of female caregivers supporting male veterans. Caregiver-related pages for major veteran service organization American Legion similarly depicts a female caregiver and a male veteran.

An Airman assigned to the 606th Air Control Squadron reunites with her loved one during the squadron’s return from deployment to Spangdahlem Air Base, Germany, Oct. 20, 2016.

Male caregivers receive minimal attention, even though a Rand report commissioned by the Elizabeth Dole Foundation found that more than 40% of veterans’ caregivers are men. Many of those male caregivers support some of the over two million women veterans (over 300,000 of whom are combat veterans) in the United States.

I am one of those women veterans, and one of those male caregivers is my partner. I have never publicly written about him before, but he undoubtedly deserves credit. A veteran of the war in Afghanistan, he’s also thoughtful and nurturing. I live with chronic pain, often cannot complete basic household tasks, and spend a full day out of nearly every week at VA appointments. He does every household task and errand to account for both my disability and my lost time so that I am not disadvantaged while we both go to school full time. He does not fit the stereotypical image of “caregiver” and deserves all the support I would get were the roles reversed.

Despite the reality that plenty of men actively care of their partners and children, caregiving and domestic roles are traditionally considered “women’s work.” There is an expectation that women will assume caregiving responsibility; when break this stereotype, it is considered specifically remarkable. Unless men’s domestic, nurturing contributions are fully acknowledged and supported, caregiving will remain in an invisible, subordinated status, solely the patriotic duty of female caregivers selflessly toiling in the domestic sphere.

Inclusivity in organizations supporting veterans is imperative. Without it, underserved populations of veterans, especially women and LGBT veterans, remain marginalized. Caregivers cannot truly be recognized and supported without acknowledging the diversity of the veteran population.

By visibly focusing attention only on the military/veteran wife as caregiver, support networks attempt to alleviate one problem while perpetuating the issue of invisibility. It is only nominally relevant whether or not the organization actually provides resources for male caregivers. Without being a visibly inclusive organizations, these resource networks communicate to male caregivers and women veterans that, like most veterans’ service organizations, they are not built for them. The result is that underserved populations and their needs remain hidden from the public eye.