When retired Marine Col. Eric Hastings returned from duty as a fighter pilot in the Vietnam War, he turned to... 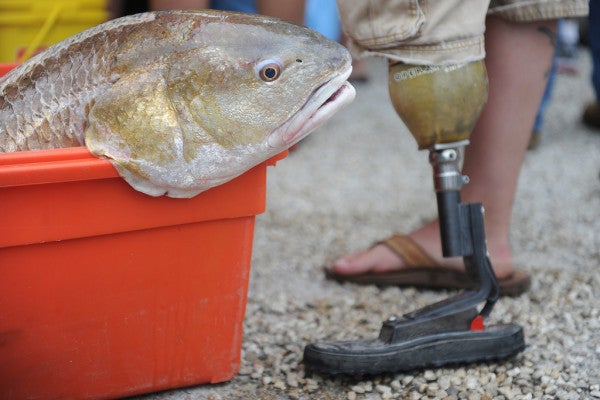 When retired Marine Col. Eric Hastings returned from duty as a fighter pilot in the Vietnam War, he turned to fly fishing as a method for obtaining relief from the lingering stress of combat. For the past seven years, Hastings and a group of dedicated fly fishers have shared this relief with wounded warriors through their Warriors and Quiet Waters Foundation.

The feature-length documentary, “Not Yet Begun to Fight,” portrays the narratives of five wounded Marine, Navy, and Army veterans who arrive in Bozeman, Montana, ostensibly to learn fly fishing, but also to learn a measure of peace if they can find it. Each veteran brings with them their stories, which unfold in a leisurely manner, intercut with the visuals of learning the basic elements of fly fishing.

Hastings assigns a guide to each veteran, who gives them personalized instruction and also assists them with mobility when necessary. The veterans begin by learning to cast on dry land, then move to the river, where they practice catching and releasing trout.

The veterans’ injuries run the gamut. Marine Staff Sgt. Mark Hupp battles the invisible wounds of post-traumatic stress disorder. Several of the veterans are missing limbs. Retired Navy SEAL Elliot Miller is severely limited in his mobility at the time of the film, and communicates through a voice-enabled tablet.

Throughout the documentary, the pacing and narrative flow set a smooth, meditative rhythm, much like the service members learn out on the water. There are few hurried sequences, and long stretches where the camera pulls back to allow the veterans some time alone, or just to allow events to unfold without overt narration.

Some of the phrasing found in the interviews will be familiar to both military and civilian audiences. One veteran, Marine Cpl. Erik Goodge, a forward observer who lost his right eye, speaks of wishing he could return to Afghanistan, and that combat is about taking care of the person next to you. An early sequence shows footage from the Naval Medical Center in San Diego that looks pretty much like every other footage of wounded veterans learning to cope with their changed circumstances.

The filmmakers, directors Shasta Grenier and Sabrina Lee, allow time for humor, especially that which arises naturally from a group of military members. Marine Capt. Blake Smith, a helicopter pilot, describes his former aircraft has having the “…flight characteristics of a broken grocery cart.”

In another sequence — this one on the bus driving them to and from the river — the veterans joke about the likelihood of bears attacking, judging them likely to be attracted to “amputees and toddlers.”

One of the themes that run through the film is that of being “overwhelmed.” Hastings uses this word early in the film to describe Smith’s laugh. Other times, the men use it to describe both combat and the long road to recovery after returning from combat.

In one sequence, Smith begins detailing the injuries he suffered when his aircraft collided with another in midair. As he begins what appears to be an oft-repeated catalogue of extensive proportions, the frame jump cuts ahead, a cinematic device that can come across as humorous, and combined with Smith’s deadpan delivery, almost does here. It’s only when he is finished that the viewer realizes the overwhelming extent of what he faces on a daily basis.

This documentary is one of many that detail the grassroots initiatives that sprang up in the last 10 years, many of them, like Warriors and Quiet Waters, started by fellow veterans. In the face of institutional failures such as those seen within the Department of Veterans Affairs — and even within some independent charities coming under fire for their methods — these smaller initiatives provide support to military members who need assistance reintegrating, from veterans, such as Hastings, who have been in the same situation at one time.

One of the most poignant parts of the film comes toward the end. Smith talks of his crash, visibly trying to hold it together, as he speaks of the shame of having people think he caused the crash in which he was injured and fellow service members were killed. Hastings, the former fighter pilot, responds to that grief, one of the few people in the military, let alone the world, who can honestly know what Smith is going through.

“Not Yet Begun to Fight,” the title of which was taken from one of Miller’s tattoos, has enjoyed a respectable festival run and is now available on several streaming formats. A product of a civilian crew, the film is accessible to both civilian and military audiences. It joins a cohort of civilian-produced films about these micro-initiatives, such as “HEAL! Veterans and Their Service Dogs,” and “Riding My Way Back,” both of which were official selections at the 2014 G.I. Film Festival.

As the film comes to an end, each of the five men returns to his life. Goodge continues fishing with a passion. Miller moves on to achieve goals such as obtaining a driver’s license and working on being able to speak again. Smith marries, then divorces, his fiancée.

There is a place for these micro-initiatives, and the message that they bring to veterans and transitioning service members. Perhaps some of that message, and some of that passion, can next be embodied by the institutions charged with rehabilitating and reintegrating all service members who find themselves struggling with their service-related wounds, both visible and invisible.

culture
Not Yet Begun to Fight
Rachel Brune