For some veterans struggling with the lingering wounds from their military service, they’ve found support and companionship in man’s best... 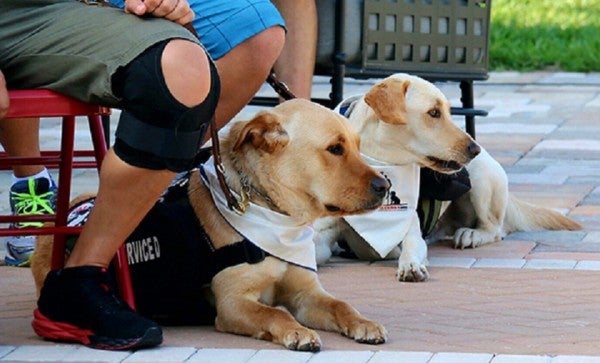 For some veterans struggling with the lingering wounds from their military service, they’ve found support and companionship in man’s best friend. While service dogs come in many shapes, sizes, and perform different roles depending on their handler’s needs, there is a growing number of groups training service dogs to assist military veterans.

Since K9s For Warriors was founded in 2009, it’s grown from a staff of three to more than 36 employees and has helped more than 200 veterans receive service dogs. As part of the program, participants take part in a 21-day course where they live on site at the training facility in Palm Valley, Florida, and work with their service dogs six days a week, according to Brett Simon, the director of operations at K9s For Warriors.

In addition to the training each dog receives prior to meeting their veterans, they will train with their handlers for roughly 120 hours before graduation from K9s For Warriors.

Related: How To Train Your Dog To Military Standards »

Simon spoke with Task & Purpose about how their service dogs are trained; what services they provide their veteran handlers, which the nonprofit refers to as warriors; and how veterans and their service dogs build and strengthen their bond.

For the service dogs, the training begins months before they meet their veterans.

“It takes us about four to five months to get them ready, and that’s with a civilian trainer on site,” explains Simon, who adds that roughly 95% of their service dogs are rescues from shelters or come to them after an owner surrenders the animal.

Simon says they will occasionally select specific breeds for hypoallergenic reasons, like labradoodles and poodle mixes for veterans or family members who have allergies.

A handler and his service dog train together.Photo courtesy of K9s For Warriors

Additionally, the service dogs need to be under two years or younger, must weigh a minimum of 54 pounds, and be at least two feet tall to qualify for the program.

“The reason for the weight and the height is for the weight we need them to be sturdy for the guys to use them for brace,” says Simon. “They’re not putting all of their weight on them, but for enough to assit them up.”

“Brace” is one of several commands taught to the service dogs, and it allows the handlers to put some of their weight on the animal when they’re standing up.

The dogs are taught a number of commands to help their handlers deal with stress, anxiety, and limited mobility.

“We have a few dogs that have gone through the program that have been trained to retrieve items, do some other things for them that they’re not physically able to do,” says Simon. “We have one dog that’s trained to help pull his clothes off — he’s unable to bend over and get his socks and shoes off, so the dog would do it for him. That’s on a limited case-by-case basis.”

Simon explains that in addition to “brace,” the service dogs are taught to disrupt nightmares.

“Some of the guys sleep really heavily and have nightmares and the dogs come over and wake them up,” says Simon. “We’ve seen a lot of improvement from the surveys we do with our graduates that the night terrors are starting to dissipate. The guys who were saying they were getting two and a half hours of sleep are up to five hours of sleep a night now, so the dog has definitely benefited them being there.”

Another command is called “my lap,” and it’s exactly what it sounds like.

If a handler is feeling anxious or uncomfortable, he or she can call their service dog to them as a way to relieve tension and stress.

“But we do teach the command as well as a training command to come in their lap and to press against them, and the compression and also the petting reduces stress and anxiety and lowers blood pressure and things of that nature,” says Simon. “That’s one of the ways we get the dogs to do that; we ask them to come in their laps as trainers.”

As a handler and the service dog forge a stronger bond over time through training and the liberal use of treats, the dog will respond intuitively to the veteran’s needs, Simon explains.

“Once they make that bond, the dog normally starts to alert the veteran on their own that something's going on here … and they can take the focus off of whatever’s stressing them to try to reduce that anxiety,” says Simon.