On the surface, the veterans I exercise with in the gym or on the running trail appear to be doing … Continued 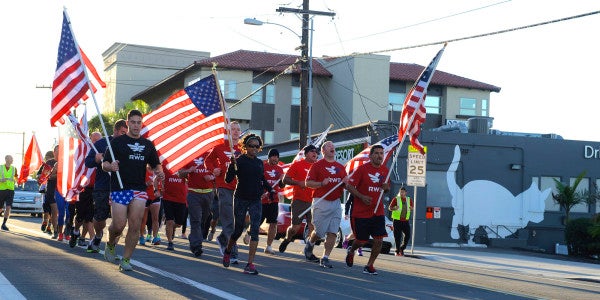 On the surface, the veterans I exercise with in the gym or on the running trail appear to be doing great. But in quiet moments, sometimes between breaths on a treadmill, or unloading a barbell, core truths are revealed: It isn’t always easy. Memories are painful, and emotions are raw. They have stories to tell that require an audience.

Even as a civilian, I see how important it is for veterans to be able to authentically connect with others through physical fitness and social activities, foster new friendships, and build stronger support networks. Those experiences help me appreciate the impact of Team Red, White & Blue.

While Team RWB welcomes not just veterans but also active-duty military, military families, and civilians, helping veterans reintegrate and prosper after their service has remained at the core of its mission.

Related: How should veterans service organizations support the post-9/11 community?

This week, the Institute for Veterans and Military Families at Syracuse University published “Enriching Veterans' Lives Through An Evidence Based Approach,” which I co-authored as Team RWB’s research director. The report, built upon a survey completed by 4,300 Team RWB veterans in 2014 and 2015, uses Team RWB as a case study to highlight the importance of collecting data to measure impact so that military and veterans organizations can provide programs and services that not only feel good, but that actually achieve quantifiable results.

So what do the report and survey tell us about Team RWB’s quantifiable results?

Building community and relationships is important.

Survey results show that 86% of Team RWB’s most active veteran members make lasting positive relationships and 90% feel a greater sense of belonging to a larger community. This is at the core of why Team RWB exists: to help people make close friends and relationships that can even feel like family. This is really important for getting information about resources and knowing people who can help with the little challenges or life-altering problems, but it often boils down to having someone to talk to whenever you need.

Achieving mental and physical health improvements is easier with a team.

Nearly two-thirds of the most active veterans in Team RWB report maintaining a healthier weight, and more than 50% report feeling less down, depressed, or hopeless, as well as feeling less nervous, anxious or on edge. It’s no secret that exercise makes you feel better, both physically and mentally. Whether you are seeking weight loss, a boost in mood, or a chance to set new goals, being part of a team and having the opportunity to exercise as part of a group makes that easier to do.

It can lead to satisfaction at home and work.

Nearly three-quarters of the most active veteran members report that being part of Team RWB improves their mood and in turn helps them become a better family member. Approximately 40% also report feeling less stressed and being more engaged at work. The positive effects that come from being engaged with a close-knit, supportive community also spill into other areas of life. When you feel better after a workout, or even after a meaningful conversation, your whole outlook on the world can improve.

There is a reduction in the civilian-military divide.

It’s not easy to transition out of military service, especially when you live in a community that is not near a major military installation. Civilians like myself may not automatically understand all that you have been and are still going through, which is why participation by both veterans and civilians in Team RWB creates an important common ground. Approximately 30% of Team RWB members are civilians, and in part due to the diverse membership base of Team RWB, the most active veterans report that being part of the team has helped them demonstrate their strengths (82%), share their challenges (70%) and feel more connected (53%) to civilians.

Crucially, the benefits reported by veterans participating in Team RWB activities and chapters accrued most heavily and consistently to those who showed up regularly and made the team part of their lives. Increased involvement with Team RWB among veterans correlated closely with a significant increase in all beneficial results reported.

I believe in Team RWB’s mission, and clearly the model resonates: Team RWB just surpassed 100,000 members, spread across 172 chapters and communities. But having the evidence to show that the organization is helping improve the physical and mental health of veterans, and adapting programs, services, and research to ensure that those results are replicable, is a huge deal, and one that I hope serves as both a model and inspiration for similar veteran and military organizations seeking to pursue evidence-based practices.