Want To Thank A Vet For Their Service? Here Are 7 Impactful Projects You Can Support For Veterans Day

Editor’s Note: Task & Purpose and GoFundMe teamed up to highlight seven GoFundMe campaigns that are making a difference in... 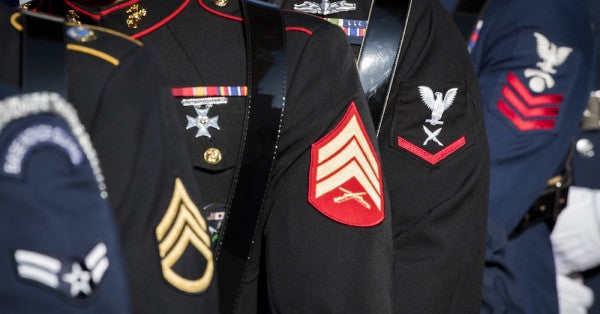 Editor’s Note: Task & Purpose and GoFundMe teamed up to highlight seven GoFundMe campaigns that are making a difference in the lives of veterans around the country. Want to make an impact this Veterans Day? Start here.

In 1919, President Woodrow Wilson established Armistice Day to mark one year since the end of World War I, honoring the brave men and women of the U.S. armed forces who laid down their lives to give the free world “an assured opportunity to reconstruct its shattered order and to work out in peace a new and juster set of international relations.” Armistice Day didn’t formally become Veterans Day for 35 more years, but the principle of honoring vets for their sacrifices has remained constant for nearly a century, now embodied in the simple refrain of average civilians on Nov. 11: “Thank you for your service.”

But few Americans realize that while U.S. veterans may stop serving their government after they transition out of the armed forces, they never stop serving their country. A 2016 survey found veterans spend 34% more time volunteering, vote 29% more often, were 34% more likely to attend public meetings, and 13% more likely to donate to charity than the average civilian.

Veterans are increasingly channeling their charitable impulses into GoFundMe, the crowdfunding platform that offers the tools for independent, entrepreneurial efforts. GoFundMe executive and former Marine Capt. Daniel Gordon, who transitioned out of the Corps in 2009, estimates that users have raised “tens of millions” across thousands of campaigns both by and for vets in the last few years alone. And that audience is only growing, says Gordon.

“This is the magic of the milvets community on GoFundMe,” says Gordon. “They see a problem, they see a solution, and they go do something about it — that’s what they’ve been trained to do.”

As vice president for “trust,” Gordon is responsible for evaluating campaigns and building user trust in the sprawling platform, engaging with campaign organizers and building mechanisms that ensure funds are actually allocated to the project as described. GoFundMe recognizes the civic power of the milvets community and Gordon says that the company plans on rolling out a variety of new tools and services to help active funders better discover and engage with vet-driven projects.

“The range of campaigns is broader than I think anyone really imagined,” he told Task & Purpose. “Plenty of campaigns focus on veterans, but most of them are simply by veterans who feel service is an important part of their lives.”

Related: How To Thank Veterans For Their Military Service »

For every large venture organized through GoFundMe — like the Army vets who “self-deployed” to hurricane-ravaged Puerto Rico to aid remote towns without access to disaster-relief services — there are small ones that are no less world-changing. Task & Purpose teamed up with GoFundMe to highlight seven ways to give back on Veterans Day — and thank vets for their service in a substantive, impactful way.

Daniel Jones, a Texas Life Scout for Cedar Park, Texas, is using GoFundMe to raise money to help out Heroes Night Out, an organization that offers counseling, support groups, holiday meals, and VA claims assistance to local vets in the greater Austin neighborhood. And instead of just asking for cash, Jones is rallying his fellow scouts to renovate and expand the center’s sparse storage facilities neglected by the organization’s limited staff.

“My project is to install cabinets along one wall of the family room to provide storage for all the supplies and games and books and stuff the kids use while they are there,” Jones says. “My fellow scouts and I along with a few other volunteers will be finishing, staining and lacquering, the cabinets as well as performing the installation (with some professional guidance, of course).”

Anthony Jackson set up a GoFundMe in late September to help host a holiday event for the homeless veterans in his hometown of Fort Pierce in Florida’s St. Lucie County, which boasts the third-highest rate of homelessness in the state. A former Army staff sergeant, Jackson first organized the charity event in 2015; this year, he turned to GoFundMe to raise more money to host vets from around the region — and to share his own experience of being homeless while serving on active duty.

“I was living out of my car and taking showers in the gym … When I would go to work, I would park my car away from my unit so no one would see all of my possessions inside of my car to avoid the questions and embarrassment,” Jackson wrote. “At the time I was a young Staff Sergeant in the United States Army with a lot of responsibilities and junior Soldiers that looked up to me. So, I went to work every day with a smile and conducted my day to day operations .. unknown to others that I was hurting on the inside.

“Once I got back on my feet, I vowed that I would make it my business to give back to those who are in need of a helping hand,” he added. “I would like to challenge all of my family, friends, fellow Veterans, and complete strangers to not forget about the less fortunate and to help make this event this year a huge success.”

Casey Wynema of Albuquerque, New Mexico, created a GoFundMe to raise money on behalf of Donovan Smith, a 14-year-old who started a soap business to provide hygiene products for homeless veterans. And these soaps aren’t just, well, soap — they’re shaped like everything from donuts to fortune cookies to McDonald's hamburgers.

Inspired by his family’s own brief struggle with homelessness and the service of his mother Casey, a Navy veteran with a service-connected disability, Smith has donated 10,000 bars to support homeless veterans through StandDown Albuquerque, a veterans integration center in the last few years. “People helped us and now I want to help others,” Donovan told People magazine in 2016. “It’s my way of saying thank you.”

Max Minnier, an Eagle Scout from Coatesville, Pennsylvania, started a GoFundMe to fund the purchase and installation of outdoor workout stations for the Coatesville Veterans Affairs Medical Center. The goal is to raise $5,000 to add new units in addition to the three the VA has already installed “due to their frequent usage,” Minnier wrote. “These stations will be a vital tool in helping military veterans during rehabilitation.”

In 2016, Air Force veteran and former police officer Donnie Davis started Operation Safe Haven, a nonprofit through which he purchased 277 acres of pristine land (including 65 a crew of campgrounds and lakes) outside of Franklinville, New Jersey, to erect “micro housing units” for vets in search of “a place of true rest and relaxation.”

“Our goal is to fix up the property and build micro housing units for veterans to stay in and provide them with a place of true rest and relaxation,” Davis writes. “Nestled in this quiet and serene environment, our veterans can focus on getting ‘squared away’ through various program and projects designed to give them the tools needed to adapt and overcome.”

In the last 17 months, Davis has raised about half of his $500,000 goal for housing construction and property and campground repairs and maintenance. But with the right push, Davis hopes the campaign will achieve its ultimate goal: to “leave a legacy and change lives forever!”

6. Help a volunteer give back to a VA hospital.

After volunteering at the Phoenix Veterans Hospital for the last few summers, Anisha Puppala launched a GoFundMe to raise $10,000 to give back to the veterans she grew close with. “I came across several Veterans, who not only lost their ability to work but also lost their home and family while serving our country,” she writes. The money Puppala raises will go toward services “that otherwise would not be available to them,” including transportation, rehabilitation equipment, recreational activities, and even phone cards.

7. Give vets a chance to heal through the power of arts and music.

Jason Moon of Madison, Wisconsin, is raising money for Warrior Songs, a nonprofit dedicated to bringing “hope and healing” to veterans suffering from PTSD through the creative arts. With a goal of $13,500, Moon wants to provide transportation, lodging, food, and supplies for 15 veterans for a four-day Warrior Songs creative arts retreat at The Siena Center in nearby Racine.

“PTSD makes it very difficult for veterans to talk about their experiences … this is where the arts come in,” writes Moon. “You can paint a feeling, or draw the part of the story you are ready to tell … The creative arts allow the veteran to explore what they are ready to talk about in a way that isn’t as triggering as traditional talk therapy.”