Veterans With Service Dogs Know Someone Always Has Their Back

When Greg Wells came home from Afghanistan in 2012, he didn’t want to leave his house. Diagnosed with post-traumatic stress … Continued 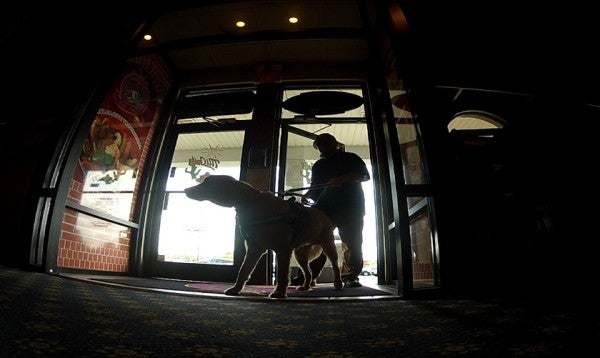 When Greg Wells came home from Afghanistan in 2012, he didn’t want to leave his house.

Diagnosed with post-traumatic stress disorder, the pills he was on didn’t seem to help. Increasingly, he felt alone and isolated until his wife suggested he try something new.

In April 2015, Wells went to a course put on by K9s For Warriors, a nonprofit founded in 2009 that trains service dogs to help post-9/11 military veterans suffering from post-traumatic stress disorder, traumatic brain injury, and military sexual trauma.

Related: This Is What It Takes To Be A Warrior’s Service Dog »

The goal is to get the warriors comfortable in public and social settings, explains Wells, an Army veteran of the Iraq War who deployed from 2003 to 2004. After leaving the Army, Wells worked in law enforcement and from 2008 to 2012 as a professional contractor in Afghanistan, where he advised and trained the Afghan National Police.

Veterans taking part in the K9s for Warriors training program line up with their service dogs at a public mall in the Jacksonville, Florida area.Photo courtesy of K9s for Warriors.

Now, he is a warrior trainer and sees some of the participants facing the same struggles he did.

Wells spoke with Task & Purpose about how the veterans at K9s For Warriors build a bond with their service dogs, and how the relationship between the two can bring about a return to normalcy.

Building a bond between warrior and service dog.

“The bond is not the same kind of bond you would have with a family member or a spouse,” says Wells. “The best way I can describe it is if you ever had a dog when you were a child, it’s what you felt like when your mom or dad brought the dog home and surprised you with it. That’s pretty much the bond you have with these dogs.”

In the case of service dogs, the bond is also critical in helping those suffering from post-traumatic stress disorder, traumatic brain injury, or military sexual trauma.

“It was just one of those things that automatically clicked,” says Wells of his service dog. “I literally had him for about four hours and I laid down to take a nap because I was exhausted, and I started having a nightmare and he woke me up. I didn’t have any knowledge of service dogs at the time, I was just trying to find another way to cope and move forward with life.”

Get outside and back in the world.

“Going out with a dog is a life-changing event once you’ve been stuck in your house for however long it is since you separated from the service,” says Wells.

The service dogs also alert their handlers when someone approaches from behind, and in stressful situations, they will comfort or distract their handlers as a way to relieve tension, explains Wells.

For some veterans dealing with feelings of isolation or loneliness, there’s also the added benefit of having a friend by their side at all times.

“Aside from the psychological, I’ve got my best friend that’s going with me no matter where I go, says Wells. “If I start to freak out, he’s going to calm me down. He’s going to notice I’m freaking out before I do, and he’s going to start smelling the pheromones and he’s gonna say, ‘Well you’re starting to act up, so I’m gonna step on your foot, I’m gonna look at you, or distract you so whatever you’re looking at, you’re gonna look at me instead.’”

However, loyalty is a two-way street.

For veterans considering a service dog, they “need to be all in,” says Wells.

“Number one thing I tell is to go into it with an open mind,” says Wells. “Honestly, not everybody is ready for a service dog. You have to be in a certain place, you’re gonna be responsible for another life and to be able to properly do that, in my opinion you need to be the person taking care of that life. You can’t just slough that off on a family member.”