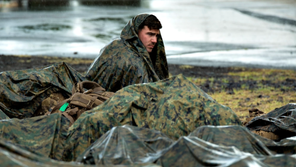 Dustin Harrison's job was to pilot a twin-engine Beechcraft King Air 350 with cameras and sensors for aerial survey.

Militant group attacks military base used by US and Kenyan forces

Less than 150 U.S. personnel were at the base at the time of the attack.

Nearly 18 years after 9/11, Al-Qaeda ‘is as strong as it has ever been,’ State Department says

Al-Qaeda and its affiliates remain as much of a threat to the U.S. as "it has ever been" after the terrorist group rebuilt itself while the U.S. and other nations focused on destroying ISIS in Iraq and Syria, a State Department official said Thursday

The U.S. military could be guilty of war crimes in Somalia, according to a new report that challenges what the government says about civilian casualties from its bombing campaign against al-Shabab, an al-Qaida affiliate, in the African nation

Al Shabab jihadists launched a vicious attack on a military base in Somalia on June 8, killing nearly 70 and...

Secretary of Defense James Mattis stated on Thursday that the Pentagon is open to sending additional U.S. troops to Somalia to fight...

It’s a busy month for U.S. military forces, with dynamic situations in Syria, Iraq, Afghanistan, and now Korea. But don’t...

The United States is primed for an increase in military operations in the Horn of Africa after President Donald J....

A training camp in Somalia for Islamist militants belonging to the group al-Shabab has been pulverized by American warplanes, killing...