A Brief History Of The Dog Tag

During the Civil War, the inability of the military to identify battlefield casualties created the need for a soldier identification... 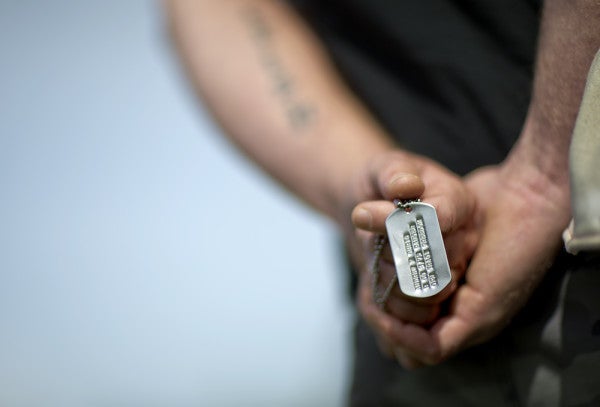 During the Civil War, the inability of the military to identify battlefield casualties created the need for a soldier identification method.

According to the U.S. Army Quartermaster Foundation, prior to the Battle of Mine Run in northern Virginia 1863, Gen. George Meade's troops wrote their names and unit designations on paper tags and pinned them to their clothing. At the same time, other soldiers created prototype identification tags out of pieces of wood, perforating one end so that they could be worn on a string around their necks.

Between 1862 and 1913, while the military considered a number of options for identifying soldier remains on the battlefield, individual soldiers continued to utilize makeshift identification methods. In 1906, a circular aluminum disc was presented. By 1913, identification tags were made mandatory by the military.

The circular tags, handstamped with name, rank, serial number, unit, and religion were used during World War I.

Dog tags, name tapes and memorabilia are displayed at the top of Mount Suribachi in Iwo To, formerly known as Iwo Jima, Japan, Dec. 17, 2014.

By World War I, soldiers wore two tags. “One tag remained with the body, tied around the legs or ankles or feet,” Luther Hanson, curator at the U.S. Army Quartermaster Museum, told The New York Times in a 2013 interview.

Around World War II, the circular tag was replaced by the more oval shape used by the military today. Its resemblance to dog collar tags led to the designation of “dog tag.” The tags used during World War II were stamped by a machine and had a rectangular shape with round ends and a notch on one side.

A gruesome rumor circulated that the notch was put in the tag so that the tag could be placed in a dead soldier’s mouth hold it open to prevent the body from gaseous bloating. However, the real reason for the notch was that the stamping machine required it to hold the tag in place during embossing.

The point of the tag ultimately is to be left around the neck of a casualty, staying with the remains at all times.

According the Library of Congress, during the Vietnam War, “changes were made to the information on dog tags.The dog tags went from the earlier eight digits with their prefix to the current nine-day digit Social Security number. You could have both stamped on your tag if you wanted; but, from this point on, the Social Security number was the main identifying number.”

Additionally, tags worn by the Marine Corps had a variety of additions including the size of their gas mask. A number of religions were added and full names were spelled out as well.

Current dog tags still utilize a two-tag system, with one on a long a chain around the neck and one interlinked by a smaller chain. The point of this method is to have one that remains around the neck and another for the toe for the coroner’s purposes.

Though the dog tag has remained largely unchanged since the Vietnam War, the Army is currently developing and testing several new dog tags known by various names including the soldier data tag, individually carried record, meditag, and the personal information carrier.

The new dog tags will contain microchip or USB technology, which will hold a soldier’s medical and dental records, reported The New York Times.