America’s Options In Niger: Join Forces To Reduce Tensions, Or Fan The Flames Of Terror

This article originally appeared on The Conversation Numerous reports have appeared recently about beefing up the U.S. military presence in Niger... 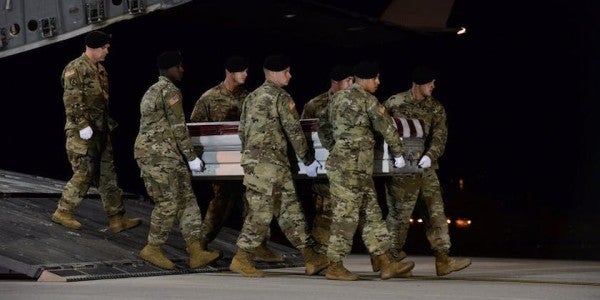 This article originally appeared on The Conversation

Numerous reports have appeared recently about beefing up the U.S. military presence in Niger and potentially allowing American forces to more actively targeting suspected jihadist leaders in the region. This follows the deaths of U.S. and Nigerien soldiers in Niger on Oct. 4.

Most U.S. and Nigerien officials have made it clear they believe that the attack was committed by the self-proclaimed Islamic State in the Greater Sahara (ISGS) under Adnan Abu Walid al-Sahraoui, or fighters under his sway.

But the links between militant groups in the region – whether identified as “jihadist” or not – are often fluid and belie easy categorization. This label obscures a situation which deserves much more consideration before pulling the trigger. And it takes attention away from the experiences of local populations who are often stuck between militant groups and sometimes hostile governments and foreign armies.

The area in which the American soldiers died is already replete with all possible forms of foreign or domestic interventions. These range from muscular to diplomatic, security-oriented to development oriented. The G5 Sahel, a regional initiative backed by the French to enhance security cooperation, presents one opportunity to consolidate and harmonize these efforts. For now, though, it has struggled to develop its capabilities and to raise the money necessary to function.

Rather than considering whether they should revise their military rules of engagement, U.S. authorities should ask themselves how they could contribute to what already exists. They should also understand that without attention to the local environment and genuine care for local civilians, the fire along the Mali-Niger border will only grow hotter and more difficult to contain.

History of jihadist groups in Niger and the Greater Sahara

The history of Islamic State in the Greater Sahara stems in part from the fracturing of jihadist groups in Mali. It’s also linked to the complicated tableaux of local conflicts that exploded from the 2012 Tuareg rebellion and subsequent jihadist occupation of the country’s north.

Sahraoui became disappointed by the lack of political progress and became involved in trade with Malian Arab communities. His religious views grew more radical during this period. In 2012, he emerged as a spokesman of the Movement for Oneness and Jihad in West Africa (MUJAO). This was a splinter group from al-Qaeda in the Islamic Maghreb (AQIM), which grew out of the Algerian civil war but eventually established deep roots in the Sahel. MUJAO occupied Gao along with other fighters. It eventually expelled the largely Tamasheq independence movement, the National Movement for the Liberation of Azawad (MNLA), from the city.

Related: After Niger, The Army Is Doubling Down On Its Counterterrorism Mission In Africa »

During this period jihadist groups in Mali received an influx of new recruits. This included significant numbers of Nigerien and other Peul from central Mali and the Niger River Buckle. There were a number of reasons for this. One was rising communal tensions driven by increasing competition for grazing space, theft of cattle and attacks on Nigerien Peul communities who increasingly had to graze in Mali’s north-eastern regions. Tensions grew between Peul and sedentary communities. It also grew with other traditionally nomadic and semi-nomadic communities like the Daoussahak. Another was the freer circulation of weapons in the 1980s and 1990s. All contributed to a degradation of security for civilians along the Mali-Niger border area.

The Malian rebellions and civil war of the 1990s further exacerbated these tensions. The arming of individual communities and continued clashes with Tamasheq communities prompted the creation of the first Nigerien Peul militia in the mid-to-late 1990s. Although these conflicts were tempered at various times through community and government intervention, the 2012 rebellion in Mali pushed them back into the foreground.

The fact that a number of Daoussahak fighters joined the MNLA – and to a lesser extent the jihadist movements – meant that regional Peul communities were at a marked disadvantage in 2012 compared with their rivals. MUJAO was able to recruit heavily among Toleebe Peul in particular. The group demonstrated astute knowledge of local communities and emphasized its Sahelian membership and the centuries-long history of Sahelian and West African jihads.

After the French intervention in January 2013, MUJAO shifted significantly. Some of its key players formed a pro-government Arab militia which ended up signing the peace agreement with the separatists in 2015. Its presence at official events is now completely normalized.

Those who did not sign fled the cities of northern Mali, joining the newly-formedAl-Mourabitoun along with groups loyal to veteran jihadist commander Mokhtar Belmokhtar. But Sahraoui’s disagreements with Belmokhtar led Sahraoui to split away in May 2015. He declared his allegiance to the Islamic State.

Sahraoui gained a reputation as a hardliner during the occupation of Gao. But he wasn’t necessarily predisposed ideologically to embrace the IS agenda. His behavior looks more like an opportunistic move to ensure his political survival in a changing Saharan jihadist landscape where alliances are reversible.

At the moment, Sahraoui is not as powerful as some say. His social base remains tiny. His claim that he represented all of al-Mourabitoun was quickly countered by Belmokhtar who made it clear that only a portion of the group’s fighters followed Sahraoui.

It also took ISIS until October 2016 to acknowledge Sahraoui’s pledge of support. And his group has only officially claimed a handful of attacks in Burkina Faso and one in Niger.

Local context is everything

For now, there has been no claim made on the Tongo Tongo attack of October 4 against the American soldiers. But even if suspicions that al-Sahraoui was responsible prove true, the local context – rather than the framework of global terrorist groups such as ISIS – remains essential to understanding what is happening.

One factor, for example, is what side local communities will eventually pick to better protect their interests in a highly politically contested space.

The Nigerien government has done little if anything to improve the situation. It has attempted to use local armed groups as proxies to combat the jihadist threat across the Malian border in Ménaka. This has further inflamed the conflict within communities. It has also led to retaliatory violence and pushed communities to align with whatever armed group can best protect them. Tensions even arise among groups chosen to carry out counter-terrorism activities because tribal leaders realize the damage they can cause to a fragile local social fabric.

The relations Sahraoui entertains with other armed groups in the area are also crucial for future developments. Even after he split from AQIM, the organization made it clear it would welcome him back under the right circumstances.

In addition, according to local interlocutors with links to Ménaka and Gao, al-Sahraoui’s forces frequently cross paths with those belonging to JNIM (the AQIM confederation set up in March 2017). In some instances, they even camp nearby. This suggests that there is a fluidity between the groups. This makes sense given that the fighters from both groups have known one another for years – and in some cases fought together.

Despite the frequent talk of the threat posed by al-Sahraoui, these contacts and the pace of attacks committed in Ménaka in particular suggest that JNIM also has strong local networks – as is the case elsewhere in northern Mali.

All this suggests that al-Sahraoui is far from predominant. And dealing with the security threats in a region riddled with deep political fractures breeding insurgency also means much more than just hunting and targeting jihadist commanders.