Kiss all that garbage you’re forced to ruck with goodbye. 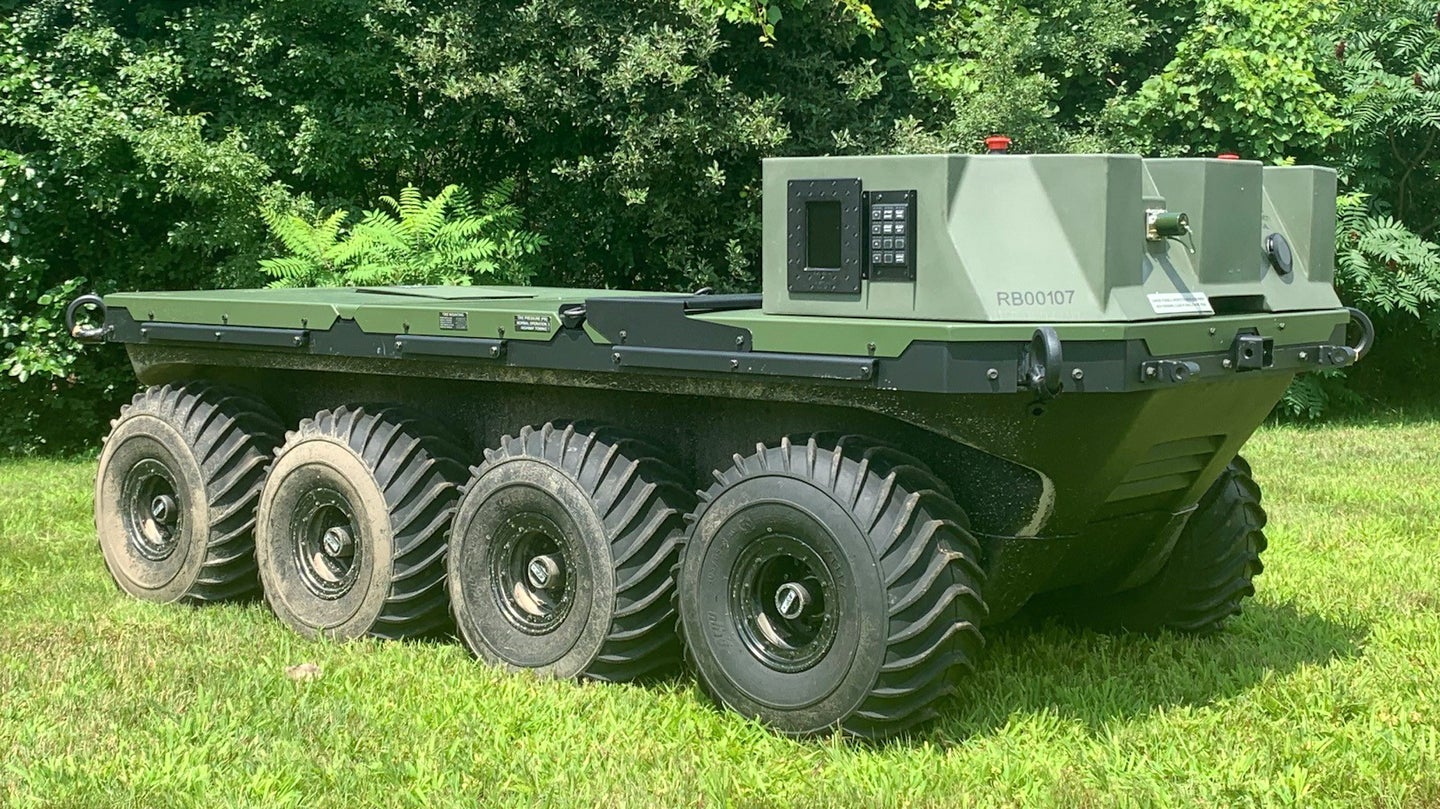 After decades of hauling way too much gear and all other kinds of bullshit on their backs downrange, the Army is finally giving soldiers the robotic assist it’s been promising for years.

Last week, General Dynamics Land Systems delivered an initial order of 16 Small Multipurpose Equipment Transport (S-MET) “robotic mule” vehicles to the Army, “making them the first ground robots of their kind” in the service’s history, according to the company.

Built on GDLS’s Multi-Utility Tactical Transport (MUTT) semi-autonomous robotic platform, the S-MET can haul between 1,000 and 2,500 pounds of gear and equipment at a speed of 8 mph and operate in a 60-mile range over a three-day period, according to the Army, capabilities designed to greatly assist dismounted units.

The robotic mule can also generate three kilowatts of power to keep the growing ecosystem of tactical electronic devices soldiers are forced to carry powered up and ready to rock at all times.

The S-MET “will help to reduce Soldier loads and increase mission capabilities by transporting mission-specific equipment, resupply equipment, and supplies required for extended operations,” according to the service’s fiscal year 2023 budget request, carrying the equipment “currently required to support Infantry and Engineer Platoons in the Infantry Brigade Combat Team (IBCT) for a 72-hour mission.”

Capt. Erika Hanson, the assistant product manager for the Squad Multipurpose Equipment Transport, put it more simply during a 2018 demo of the system: “Nine rucksacks, six boxes of MREs, and four water cans … This is about the equivalent of what a long-range mission for a light Infantry unit would need to carry.”

In other words: kiss all that garbage you’re forced to ruck with goodbye.

This relief can’t come soon enough for soldiers. While U.S. infantry loadouts increased gradually in weight between World War I and World War II before exploding around the invasion of Grenada, the current American soldier is expected to lug more than 120 pounds in personal protective equipment, weapons, comms, and food and water for an average combat loadout, according to a 2017 Government Accountability Office report.

“Army and Marine Corps officials stated that the PPE provides significant additional protection when compared with equipment used prior to operations in Iraq in the 2000s,” the GAO report said. “However, they also noted that providing this level of protection adds significant bulk and weight to the total load on Soldiers and Marines, which could impede mobility and hinder combat effectiveness.”

Indeed, a follow-up 2018 report from the Center for New America Security found that roughly one-third of medical evacuations of U.S. troops in Iraq and Afghanistan between 2004 and 2007 were due to spinal, connective tissue, or musculoskeletal injuries — twice as many injuries as those sustained in combat.

In response to the growing weight on soldiers’ shoulders, the Army (and Marine Corps) has been exploring various efforts to reduce the load on ground combat personnel, from iterating on the current soldier PPE with more lightweight body armor and combat helmets to “load transferring systems” like the S-MET.

GDLS won an initial contract to produce S-MET vehicles for the Army back in 2020 before allowing four defense contractors to recompete for the contract following protests from Textron.

Although fielding of the S-MET was originally planned for the second quarter of the fiscal year 2021, the service initially stated that it wanted to see a total lot of 624 S-MET vehicles in operation within three years of initial fielding, although Army budget documents indicate the currently approved acquisition objective number for the robot mules is “TBD.”

So far, the Army has purchased 409 S-MET systems over three contracts with GDLS since its initial contract award in 2020, according to Army budget documents. Time will tell when these first 16 robotic mules actually start to see action.