Defense Secretary Mark Esper, a month into the job, toured Electric Boat on Tuesday, including a walkthrough of the Navy's newest attack submarine, USS South Dakota, which is undergoing a major upgrade to make the already stealthy submarine even quieter in response to continued advancement by China and Russia in their undersea fleets 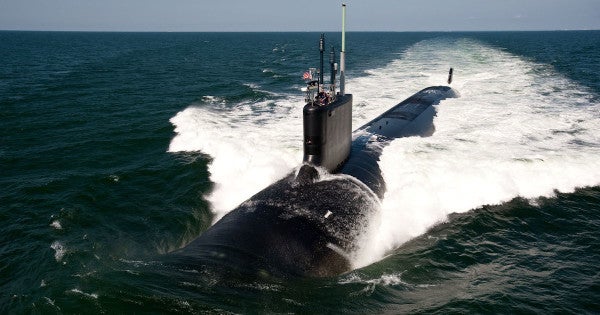 GROTON, Conn. — Defense Secretary Mark Esper, a month into the job, toured Electric Boat on Tuesday, including a walkthrough of the Navy's newest attack submarine, USS South Dakota, which is undergoing a major upgrade to make the already stealthy submarine even quieter in response to continued advancement by China and Russia in their undersea fleets.

Esper's focus of late has been on China, which is increasingly staking a claim in the Indo-Pacific region, and which recently tested multiple anti-ship ballistic missiles. He told a crowd at the Naval War College in Newport earlier in the day that the Pentagon is looking at ways to increase its presence in the region.

Addressing a group of EB workers and crew members of the South Dakota, Esper said the U.S. is back in an era of great power competition.

“The Russians and Chinese have been at it for a while and we've kind of missed the ball, but we're back on our game right now,” he said.

Where the U.S. has a distinct advantage, he said, is in its submarine fleet — “well-built machines of war, if you will.”

“We have to maintain that overmatch, and that means we have to continue to grow the fleet and build capabilities into each version,” Esper said.

Officials have spoken generally about the improvements being made to the South Dakota, such as quieter machinery, a hull coating that will better absorb sound, and new sonar capabilities to improve threat detection. South Dakota is considered the test ship for the improvements, and any insights gained will drive future technological advancements.

U.S. Sen. Richard Blumenthal, D-Conn., who invited Esper to tour EB, said Esper emphasized to him at the end of the visit “the need to prioritize undersea warfare and the submarines made here because it's an area where we are clearly ahead of our adversaries and where that superiority makes all the difference.”

At one point during the tour, Esper asked Geiger, after Geiger had explained EB's construction process, whether the Russians “build subs this way. … Because they build good subs.” Russia builds its submarines in a similar fashion, Geiger said, and while its submarines are advanced, it does not have a lot of them.

China, for its part, is expected to have a fleet of 70 submarines — both diesel and nuclear — by 2020 and “that number is going to continue to grow as they're getting more proficient in submarine construction,” said U.S. Rep. Joe Courtney, D-2nd District, who also attended Tuesday's tour.

Esper is “picking up” where former Defense Secretary James Mattis left off “in terms of highlighting the challenge that exists in the Indo-Pacific region with China's posture out there,” Courtney said.

Submarines, given their stealth, are able to operate in that environment unimpeded, he said. That's what's driving the work at EB, he said, “this new strategic reality that the submarine fleet is uniquely positioned to lead the way.”