The F-15C May Soon Be Headed Into Retirement

The Air Force is weighing whether it should retire its fleet of F-15C fighters from its active-duty and reserve units... 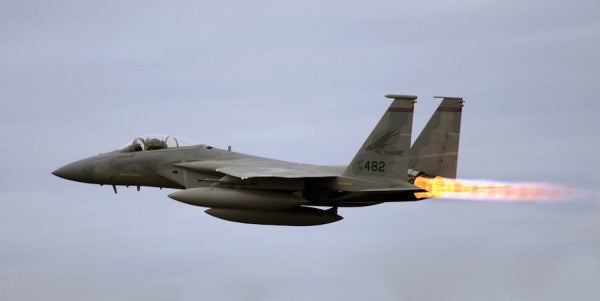 The Air Force is weighing whether it should retire its fleet of F-15C fighters from its active-duty and reserve units and transition those crews to F-16s with upgraded radars, service leaders revealed Wednesday to House lawmakers.

“Has there been a decision or a proposal by the Air Force to get rid of the F-15C and to replace it with F-16s with new radar on it? This is the first I’ve heard of it,” Rep. Martha McSally, R-Ariz., asked Air Force leaders during a hearing of the House Armed Services Subcommittee on Readiness.

Maj. Gen. Scott West, who is the Air Force director of current operations, told subcommittee members that the service is in the “pre-decisional stage” of potentially replacing the aircraft.

“I don’t know if that’s formal, but I know we are discussing ways to maximize and minimize the number of systems that we operate,” he said.

However, West did not say how much money the Air Force could save by retiring the F-15Cs.

Rice said retiring F-15Cs is one of several options that the Air Force started to consider in the fall. If the aircraft is retired, it could take effect as early as fiscal year 2019, he said.

“There’s about four or five different options,” Rice said. “One of the options is retiring the F-15Cs and replacing them with F-16s with upgraded AESA [Active Electronically Scanned Array] radars.”

The AESA radar improves an aircraft’s ability to simultaneously scan for air-to-air and air-to-ground threats. It is already installed on some of the military’s newer fighters.

McSally, a retired Air Force A-10 squadron commander, questioned whether the F-16 could match the capabilities of the F-15C.

“I don’t want to get into pilot rivalries here, but if we’re talking about fourth generation assets, you’ve got the F-15C, which prior to the F-22 was the best at air-to-air … the F-16 is an incredible, versatile, multi-role little bit less expensive sort of decathlete,” McSally said.

“Comparing the capabilities side by side …We all need to be careful through that analysis,” McSally said. “[An F-16] doesn’t bring the same capability the F-15 does with expertise in air-to-air.”

Rice said that as the Air Force integrates all of its aircraft systems, the different capabilities each type of aircraft has will be less important.

“When you are doing a change from one major weapon system to another, you are going to be off the line for a while,” he said.

McSally said she would like to further address the issue at a follow-up subcommittee hearing.