The U.S. is finally ready to take its most expensive fighter jets into battle, as the F-35B Lightning II Joint... 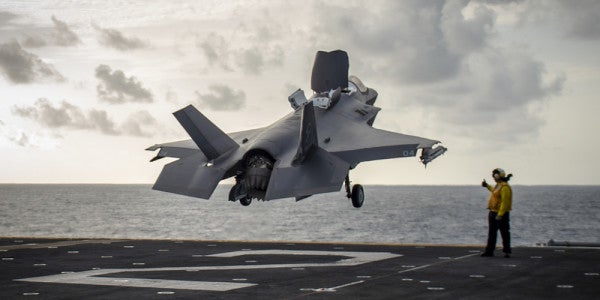 The U.S. is finally ready to take its most expensive fighter jets into battle, as the F-35B Lightning II Joint Strike Fighters sailing aboard the amphibious assault ship USS Essex may soon be called to conduct strikes against insurgent forces in Afghanistan, CNN reported Tuesday.

The USS Essex arrived in the Middle East earlier this month. Having already sailed through the Gulf of Aden into the North Arabian Sea, the ship should move into the Persian Gulf in the very near future, a defense official told CNN. The stealth fighters on board have reportedly been conducting intelligence and reconnaissance operations in Somalia, but they have yet to engage an enemy in combat.

While the U.S. Air Force was the first service to declare its version of the F-35 combat ready, it appears the Marine Corps may be the first to take the plane into combat. Marine Corps Air Station Iwakuni became the first overseas base to operate the F-35 last year.

The F-35B is designed for short takeoffs and vertical landings, giving it the ability to take off from the USS Essex, a ship much smaller than a modern U.S. aircraft carrier. The incorporation of the F-35B, a powerful aircraft built to support the Marine Corps, into the USS Essex Amphibious Ready Group (ARG) “is a very significant enabler for me and for my team,” Capt. Gerald Olin, Amphibious Squadron 1 commander and Essex ARG/Marine Expeditionary Unit commodore, told USNI News in early September.

“It increases battlespace awareness with data fusion and the ability to share information with the ships and the ships' combat control system. So it's really an extension of our sensors, and it also brings to the table a greater increased lethality than what we had with previous generation aircraft,” he added, calling it a “game changer.”

The first reported F-35 combat mission was carried out by Israel in May, when Israeli Air Force (IAF) F-35A fighters participated in strikes on unspecified targets.

“We are flying the F-35 all over the Middle East. It had become part of our operational capabilities. We are the first to attack using the F-35 in the Middle East and have already attacked twice on different fronts,” IAF chief Maj. Gen. Amikam Norkin said at the time, The Jerusalem Post reported.

Over the years, the F-35 has faced significant criticism, largely due to high costs.