KCNA did not describe the submarine's weapons systems or say where and when the inspection took place, but analysts said the apparent size of the new vessel indicated it was designed to carry missiles 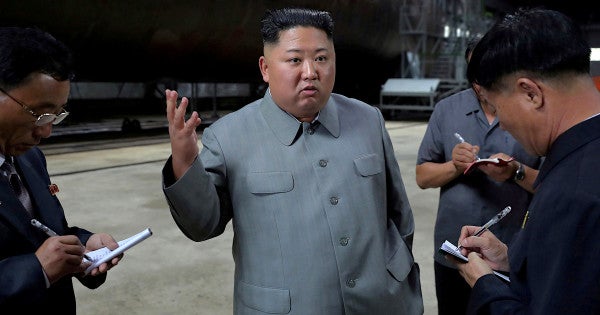 Kim inspected the operational and tactical data and combat weapon systems of the submarine that was built under “his special attention”, and will be operational in the waters off the east coast, KCNA said.

It said the submarine's operational deployment was near.

“The operational capacity of a submarine is an important component in national defense of our country bounded on its east and west by sea,” Kim said.

KCNA did not describe the submarine's weapons systems or say where and when the inspection took place, but analysts said the apparent size of the new vessel indicated it was designed to carry missiles.

North Korea has a large submarine fleet but only one known experimental submarine capable of carrying a ballistic missile.

The KCNA report comes amid another delay in resumption of talks between North Korea and the United States, in which Washington has been pushing North Korea to give up its nuclear weapons and missile programs.

Analysts said it was a clear message to Washington and came as U.S. President Donald Trump's national security adviser, John Bolton, who has taken a hard line in his approach to North Korea, was due to hold talks in South Korea.

“We can clearly see that it is a massive submarine – much larger than the existing one that's been well known since 2014,” said Ankit Panda, a senior fellow at the U.S.-based Federation of American Scientists.

He said the vessel appeared to a submarine U.S. intelligence agencies had dubbed the Sinpo-C, a successor to North Korea's only known ballistic missile submarine.

“What I find significant about the political messaging here is that this is the first time since a February 2018military parade that (Kim) has inspected a military system clearly designed to carry and deliver nuclear weapons,” Panda said.

“I take that as an ominous signal that we should be taking Kim Jong Un's end-of-year deadline for the implementation of a change in U.S. policy with the utmost seriousness.”

Kim has maintained a moratorium on testing of intercontinental ballistic missiles (ICBM) and nuclear weapons while engaging in denuclearization talks with the United States.

However, he has been frustrated at a lack of U.S. concessions and said in April he would wait until the end of the year for the United States to show more flexibility.

Last week, Pyongyang warned that if the United States and South Korea went ahead with joint military exercises next month, this could put the nuclear talks – and its freeze in testing since 2017 – at risk.

Joel Wit of the Washington-based 38 North think tank said North Korea had been working to develop a ballistic missile submarine for the past few years, but was still years away from having one that was operational.

“The North Koreans have a history of displaying weapons developments to the United States to bolster deterrence and to demonstrate that they will not be intimidated,” he said.

“This may be in response to the upcoming U.S.-South Korea joint exercises. It shouldn't be dismissed, but on the other hand, there are a lot of things they could do that would be worse.”

Wit said the sea-launched missile program was still in its initial stages when North Korea halted testing, and having an operational missile submarine would probably require more missile tests.

The U.S. State Department and Pentagon did not immediately respond to requests for comment. A spokesman for South Korea's defense ministry said it was monitoring developments but could not confirm if the submarine was designed to carry missiles.

A second summit between Trump and Kim in Vietnam in February broke down after they failed to narrow differences between U.S. demands for North Korea's complete denuclearization and North Korean demands for relief from punishing sanctions.

Trump had appeared to revitalize dialogue efforts when he met Kim on the border between the Koreas last month and said they had agreed to resume working-level talks stalled since Hanoi.

But the two sides have yet to set a time to restart talks, from which Washington hopes for a complete freeze in North Korea's nuclear and missile development as a prelude to its complete denuclearization.

Trump said on Monday his administration had very positive correspondence recently with North Korea, but no time had been agreed for new talks. He stressed North Korea's testing freeze, which he has repeatedly held up as evidence of progress in his dialogue efforts.

North Korea maintains one of the world's largest submarine fleets, but most are small ageing coastal vessels and there are doubts over how many are operational, according to the Washington-based Nuclear Threat Initiative (NTI).

However, in recent years it has made rapid progress in its SLBM program, NTI said in a report late last year.

During the submarine inspection, Kim was accompanied by Kim Jong Sik, an official who played a major role in North Korea's missile program.

Another official on the tour was Jang Chang Ha, president of the Academy of the National Defence Science, which the U.S. Treasury says leads research and development of advanced weapons systems, “including missiles and probably nuclear weapons”.

H.I. Sutton, a naval analyst who studies submarines, said KCNA's photos suggested the vessel could be based on the Romeo Class of submarine originally acquired from China in the 1970s before North Korea began producing them domestically.

North Korea is believed to have about 20 Romeos, the newest built in the mid-1990s, according to NTI.

Sutton said the submarine's deck appeared higher than the Romeo-type design and the North Koreans may have modified an existing Romeo to make a larger vessel.

“I'd bet that this is indeed a missile submarine,” he said.