"I was really struck by the fact that they predicted the F-35 getting hacked." 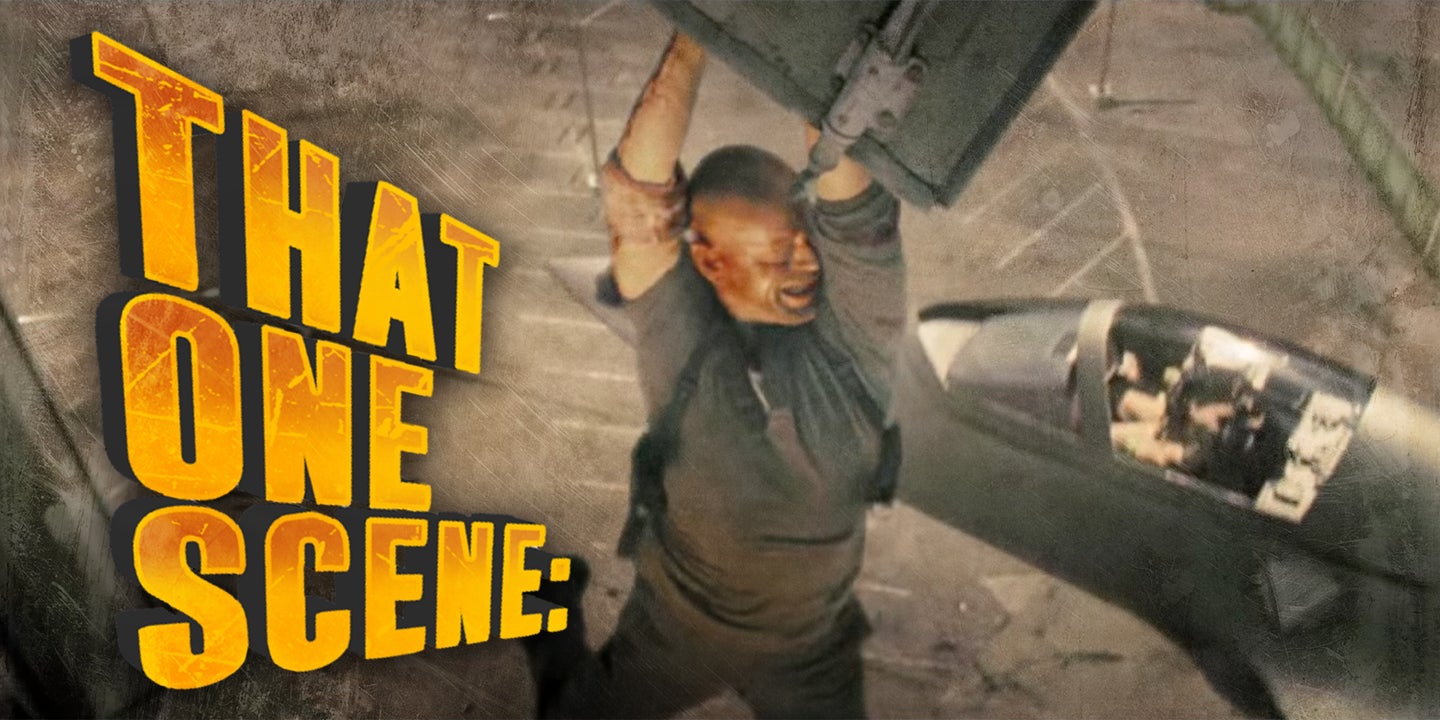 Welcome to That One Scene, a semi-regular series in which Task & Purpose staffers wax nostalgic about that one scene from a beloved movie. This article was originally published on Oct. 27, 2020.

There are few people in the world who can go up against a Marine Corps F-35B Joint Strike Fighter with nothing more than a semi-trailer truck and their wits. Luckily for viewing audiences everywhere, John McClane is that man — and his showdown with the aircraft is the stuff that action movie dreams are made of.

Near the end of the fourth Die Hard film — aptly titled Live Free or Die Hard — hero cop-turned-unkillable everyman McClane finds himself behind the wheel of a semi on a somehow-empty freeway entrance when villain Thomas Gabriel, a former top Defense Department cyber expert (played by a delectably creepy Timothy Olyphant), hacks into a nearby F-35B’s communications system and orders him to fire on McClane.

You know the scene. What ensues is, at best, total anarchy:

The F-35B, designed for short take-off and vertical landing (SVTOL) operations, flips into hover mode and locks onto McClane’s vehicle, unleashing a pair of missiles — likely AIM-9X Sidewinders based on their positioning on the wing pylons — that somehow miss the truck and plow into the highway.

“Is that it?” screams McClane, understandably furious. “Is that your best shot?”

It isn’t. Coming around the bend of the highway, the F-35 unleashes a barrage of high-caliber gunfire, eviscerating the top of the truck and aggressively perforating the trailer without somehow killing McClane, who pushes the vehicle up a collapsing section of highway. As the F-35 comes around to target McClane again, our hero flees the truck cab and dives into the trailer to avoid a collapsing section of highway, falling out the back right above the F-35 —which is immediately disabled by a piece of computer equipment that happens to fall into its turbine.

The F-35’s display flashes ENG CUTOFF FAIL and TOTAL ENG FAIL as the pilot struggles to maintain control. As he rotates the jet, McClane falls on the top of the aircraft and somehow lands between the two tail fins. As the pilot ejects, McClane leaps from the tail onto a collapsed section of the highway. The jet explodes around him in a massive, $100 million ball of fire. Our hero emerges unscathed, positively ripshit.

“I remember watching this when it came out in 2007 when I didn’t know anything about the F-35 and thinking, ‘it seems really cool but it didn’t really do anything and it crashed very quickly,'” Dan Grazier, a former Marine Corps captain and F-35 expert with the Project On Government Oversight, told Task & Purpose. “I thought that was a little odd, but now after studying the program, it seems almost fitting that the first cinematic portrayal of the F-35 — that I saw, at least — was basically a big giant flop.”

Naturally, there are several elements of the aircraft’s Die Hard debut that aren’t entirely accurate. According to Grazier, the F-35B can’t maneuver “quite as nimbly” as its cinematic cousin, especially when laden with missiles; the real-life placement of the F-35B’s 25 mm GAU-22/A cannon — in a nose-mounted pod rather than in internal bays on the fuselage — would mean that the aircraft would only manage a short burst of gunfire rather than the prolonged spray offered up in the movie; and the computer gear that disabled the jet’s main turbine would likely cause the aircraft to flip “ass over teakettle” rather than enter a controlled spin, as Grazier put it.

“The F-35B has a very large engine so it has a lot of weight, and to compensate you have to reduce fuel and reduce ammo loadout,” Grazier said. “It definitely limits the performance of the aircraft.”

The inaccuracies are totally understandable! After all, the franchise has transformed McClane into a veritable super-soldier since his initial turn as the liberator of Nakatomi Plaza in the 1988 original. But there’s a delicious sense of irony to the fact that, as one of the earliest portrayals of the ultra-expensive and constantly-beleaguered fighter program, the Die Hard scene nailed one of the F-35’s biggest vulnerabilities before it even became a major issue to the Pentagon: namely, that antagonist Gabriel was able to easily hack the aircraft’s communications system.

“I was really struck by the fact that they predicted the F-35 getting hacked,” Grazier said. “They were able to hack the communication system and spoof it to make the pilot think he was talking to a tower down in Quantico … in its big-screen debut, before anyone even thought about this, whether intentionally or not, they highlighted the cyber vulnerabilities of the F-35.”

Grazier is dead on. Indeed, the vulnerabilities facing the F-35’s Autonomic Information Logistics System (ALIS) maintenance and sustainment system have proven discouraging for Pentagon’s F-35 Joint Program Office in recent years, prompting the department to replace the system with an updated architecture known as the Operational Data Integrated Network (ODIN) to fortify the aircraft’s system against cyber intrusions.

“In the case of the F-35 program, the possible penetration points are many and varied,” as Grazier wrote for POGO recently:

Just on the aircraft itself, a hacker could potentially find access through the F-35’s communications components such as the navigation system, Link 16 datalink, and the Identification Friend or Foe system. On the ground, a hacker could access the aircraft’s systems through ALIS—and in the future through the cloud-based ODIN network—and through the reprogramming laboratory where programmers create the F-35’s mission data loads. If malware capable of disrupting onboard systems, stealing data, or injecting false data were introduced to any of these systems, it could eventually spread throughout the entire F-35 fleet as data files are shared.

F-35 program officials do not want to test real aircraft or mission support equipment because they seem to believe doing so could disrupt F-35 operations. A series of cyber tests were canceled in 2015 for fear that the tests could damage the software and essentially pollute the entire network with malware. By canceling tests or containing them within isolated laboratories, program officials tacitly acknowledge the vulnerability of the F-35 and its ground-based data networks, and that hackers or enemy cyber-warriors could inflict real damage.

The ALIS-related cybersecurity issues came to light in a significant way for the Pentagon following a Government Accountability Office report that warned about cyber vulnerabilities in almost all of the Pentagon’s next-generation weapons systems — a report that dropped more than a decade after Live Free or Die Hard hit the silver screen in 2007.

“Today, it’s one of the biggest weaknesses of the program,” Grazier said. “There are so many cyber vulnerabilities with ALIS and other issues down the road won’t be solved with ODIN. It’s a plot device, sure, but it was an accurate, prophetic plot device that they decided to include.”

There you have it: Despite going head-to-head with a former New York Police Department detective in a semi and getting its ass handed to it, the F-35B’s biggest Die Hard weakness is shoddy architecture — and given the plot focus of the franchise’s fourth installment, this seems absolutely appropriate.

As it turns out, 8 million lines of code played a bigger role in turning the F-35 into pavement dressing more than McClane’s one-in-a-million heroics did. Let’s just hope the Pentagon fixes the problem before the next big war.