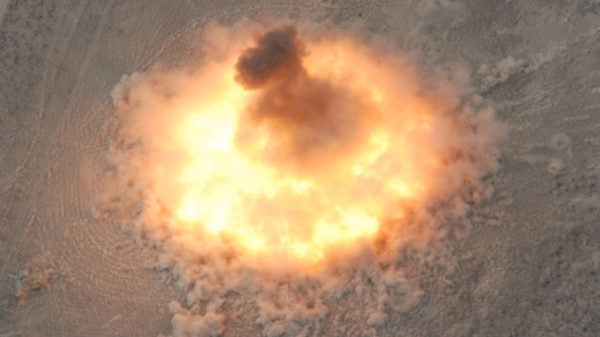 The next “Mother of All Bombs” will probably be smaller, leaner and lighter but will still pack a punch.

It’s what scientists and engineers at the U.S. Air Force Research Lab are working on as part of their next-generation munition concept.

Part of the Advanced Ordnance Technologies program, the bomb could be structured to be lighter by using 3D-printed reconstructed loads within the bomb instead of in the casing — plus distributed blast yields, said Dr. John Corley, the core technical competency lead for ordnance sciences at AFRL.

“We’ve been working on printing for the past five to 10 years,” Corley said Thursday during a Defense Department Lab day in the Pentagon courtyard.

Corley and colleagues were showcasing a prototype one-seventh the scale of a bomb the lab is working on, along with various fuse technologies.

One of the key enablers to prototyping the bomb is through 3D printing. “Right now, most of your penetrator munitions have two-inch case walls,” Corley said, which actually prohibits a larger blast and creates more debris.

Instead, the lab has begun printing casing prototypes — with steel — that moves the load from the case to within the bomb itself (the vertical loads look very similar to a DNA double helix within the bomb).

Furthermore, the lab is using distributed embedded fusing in the bomb “so not only do we have all these other features we’re relocating the fireset for the bomb into the explosive, so you can distribute that around different places in the bomb to improve survivability,” Corley said.

In current penetrating munitions, the ways in which the fuse is hardwired to the case is limiting, Corley said. By separating the fuse from the case could make the bomb more flexible of when it hits and how it hits.

The fuse prototypes are also being 3D printed at this time.

The next step for the advanced future bomb will be to incorporate these various “selectable effects,” as Corley called them.

“In a selectable effects, on any given day you might want it to be the same weapon to give you a small blast footprint, or a large blast footprint, and right now we can control this …height of burst,” he said.

The burst height controls the range of damage. The succeeding shockwave — just like the 21,600-pound, GPS-guided GBU-43 Massive Ordnance Air Blast, or MOAB, uses to penetrate its target — could very well be controlled to be smaller or larger depending on which selectable effect is used.

The guided bomb unit-43/B Massive Ordnance Air Blast bomb prototype is shown moments before impact. The detonation created a mushroom cloud that could be seen 20 miles away.Photo via DoD/Wikimedia Commons

Thus, how much or how little yield the bomb exerts could be determined for whatever the mission may be — so for once, size (of the actual bomb) doesn’t matter.

Looking past MOAB-style bombs, Corley also noted the military aircraft of today are becoming smaller, so weapons too need to adapt — and, of course, fit. “Workhorse munitions for us are 500 pound and

Corley said whether the Air Force will make the bombs in-house — much like the MOAB — is still to be determined. Tail kits on bombs, for example, are more likely to be constructed by defense industry companies than the bombs themselves, which “the government owns,” he said.

Physical bombs being worked on through the AOT program are still a “few years off” because most are still in the concept stage, Corley said.