With only weeks to go, the Navy’s most expensive aircraft carrier to date is on track to miss the service’s... 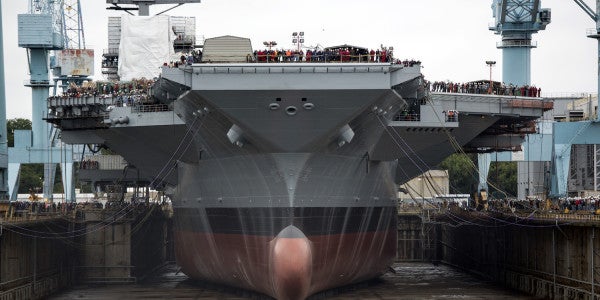 With only weeks to go, the Navy’s most expensive aircraft carrier to date is on track to miss the service’s November delivery deadline.

That’s the latest slip for the $12.9 billion USS Gerald R. Ford, which is being built at Huntington Ingalls Industries. The carrier was originally expected to be delivered in 2014 but has been beset by delays, cost overruns and technological problems with unproven systems.

In June and again in July, two of Ford’s electricity-generating main turbines experienced issues. Capt. Thurraya Kent, a spokeswoman for the assistant secretary of the Navy for research, development and acquisition, said the problem originated with a voltage regulator, but she did not provide additional details on the failure.

The Navy is developing an in-place fix for the turbine generators, Kent said, adding that they are not associated with the Ford’s nuclear reactor plant.

It “wouldn’t be prudent” to provide a new delivery date, Kent said, adding that testing continues on the ship’s systems.

“We continue to look for opportunities to get Gerald R. Ford to sea as soon as possible,” Kent said in a statement. “The Navy is evaluating the most cost-effective and efficient schedule to complete sea trials and ship delivery.”

The Pentagon will begin a review of the Ford this month to gather lessons learned from the carrier’s construction and completion. That review is expected to last until mid-December, Mark Wright, a spokesman for the office of the secretary of defense, said.

When testing and integration of systems is complete, the Ford will prove itself to be “a super reliable platform out there that will bring unbelievable capability to the United States Navy, and this will all be a distant memory,” Chief of Naval Operations Adm. John Richardson said in an interview following a meeting at Norfolk Naval Station last week.

“What we are seeing is what we see every time a new and very capable and very complex thing is literally brought to life,” he said.

A Pentagon inspector general’s report released in July said mismanagement, software issues, cost overruns and hardware failures had delayed the Ford’s testing of its advanced arresting gear, the system that helps land aircraft on the flight deck. The Navy will determine by December whether to go forward with the system on the next two carriers in the Ford class.