The Cold War may have ended in 1991, but the looming threat of nuclear attack lives on with more than... 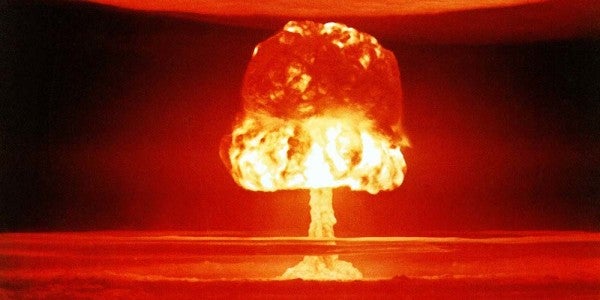 “National planning scenario number-one is a 10-kiloton nuclear detonation in a modern US city,” Brooke Buddemeier, a health physicist and radiation expert at Lawrence Livermore National Laboratory (LLNL), told Business Insider. “A 10-kiloton nuclear detonation is equivalent to 5,000 Oklahoma City bombings. Though we call it 'low-yield,' it's a pretty darn big explosion.”

Buddemeier could not estimate the likelihood of such a terrorist attack, stating “it's one of these things that changes with time.”

“It also affects the immune system and your ability to fight infections,” Buddemeier says.

“Close into the site, they may be a bit larger than golf-ball-size, but really what we're talking about are things like salt- or sand-size particles,” Buddemeier says, adding that fallout doesn't really resemble “snow” or dust, as movies often depict. “It's the penetrating gamma radiation coming off of those particles that's the hazard.”

A car is the least-ideal place to shelter for a variety of reasons, says Buddemeier. For one, “your ability to know where the fallout's gonna go, and outrun it, are — well, it's very unlikely,” he says. Fallout is carried by high-altitude winds that are “often booking along at 100 miles per hour,” he adds, so you'd be very unlikely to out-run or out-drive the fallout.

But most importantly, you shouldn't “assume that the glass and metal of a vehicle can protect you” from fallout, says Buddemeier. “Modern vehicles are made of glass and very light metals, and they offer almost no protection. You're just going to sit on a road someplace” and be exposed.

A much better shelter is likely within a quick walk or run of wherever you may be, Buddemeier says, and “the timing is important.”

Your best shot at survival after a nuclear disaster is to immediately get into a “robust structure” and stay there. Buddemeier is a fan of the mantra “go in, stay in, tune in.”

“Get inside … and get to the center of that building. If you happen to have access to below-ground areas, getting below ground is great,” he says.

The reason to wait is that levels of gamma and other radiation fall off exponentially after a nuclear blast as “hot” radioisotopes decay into more stable atoms. This slowly shrinks the dangerous fallout zone — the area where high-altitude winds have dropped the most radioactive fission products.

“Try to use whatever communication tools you have,” Buddemeier says, adding that a hand-cranked radio is a good object to keep at work and home, since emergency providers would be broadcasting instructions, tracking the fallout cloud, and identifying where any safe corridors for escape could be.

Despite the fearsome power of a nuclear EMP, which has the potential to damage electronics, Buddemeier says “there is a good chance that there will be plenty of functioning radios even within a few miles of the event” that can provide “information on the safest strategy to keep you and your family safe.”

“We may not be able to do much about the blast casualties, because where you were is where you were, and you can't really change that. But fallout casualties are entirely preventable,” he says. “In a large city … knowing what to do after an event like this can literally save hundreds of thousands of people from radiation illness or fatalities.”