A Poker Champ Explains What Gambling Teaches Us About War

In many ways war and combat are all about calculated risk. Ground combat troops, like the infantry, are masters of... 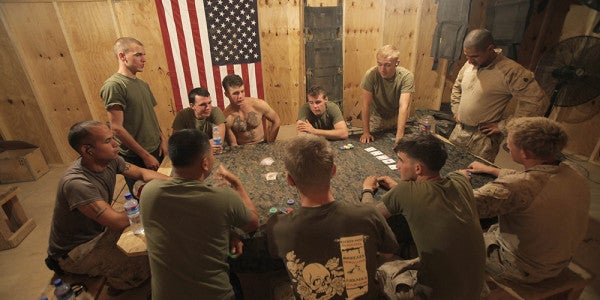 In many ways war and combat are all about calculated risk. Ground combat troops, like the infantry, are masters of controlled chaos, which means they are experts at assessing risk and responding to it appropriately.

Combat, like poker, is a gamble. There is no guarantee of success, but a commander that accepts the risk and then attacks when he has the advantage has a better chance of defeating the enemy than a leader who avoids risk.

Related: Tips From A Military Lawyer On How To Win Any Argument »

In an interview with Task & Purpose, Mike Sexton, former Army paratrooper turned poker champion, lays out what gambling can teach about war, whether it’s knowing when to stand your ground, or when to wait for a better opportunity.

“I definitely think there’s a carry-over to military, and to life in general, when it comes to taking chances,” says Sexton, who served in the Army from 1970 to 1972.

In June 2006, Sexton won the third annual World Series of Poker Championship, and with it, a $1 million prize.

According to Sexton, gambling can teach us three things about warfare.

First, you have to accept that some things are beyond your control.

All you can do is make the best decisions when and where you can, explains Sexton. On the poker table it’s about putting money into the pot with your best hand.

The battlefield is no different.

You need to draw your opponent out and strike from a position of strength.

“In poker, your mission is to get your money in the pot when you have your best hand,” says Sexton. “You want your opponent to be drawn out on that hand when the money goes in. You want to have him dominated.”

In cards, a skilled player is an attentive observer, just like a battlefield commander. He watches the enemy’s movements and anticipates their action instead of reacting.

“In poker, what you do is you’re constantly gathering information at the table,” says Sexton. “The way a guy bets, by how he’s acting, how much he’s betting. Your gathering all this information and you make a decision as to whether to play the pot or fold when it comes to you, based on the information that you’re given.”

Observation, while important, won’t amount to much if you never make a move.

You have to make a decision.

“You’re gonna have choices constantly when you’re on the battlefield,” Sexton adds. “What to do: Do you want to guard the flank? Do you want to do this, do that? It’s all about choices and obviously your mission is to make the best choices given the circumstances at the time. You can’t do anymore than that.”

If you focus on making the best possible decisions at the right time, you’ll come out alright, says Sexton.