There are currently around 30,000 National Guard service-members working their asses off to assist in search and rescue and relief... 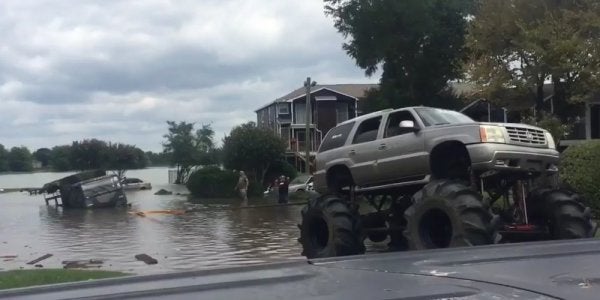 There are currently around 30,000 National Guard service-members working their asses off to assist in search and rescue and relief efforts across Texas and Louisiana in the aftermath of the unprecedented flooding wrought by Hurricane Harvey. And though the Guard, bolstered by some 6,000 active-duty troops and an armada of “Cajun Navy” civilian and veteran volunteers, perform dutifully and honorably as the federal government's first line of defense against natural disasters, sometimes even guardsmen need a helping hand from the very folks they've been sent to rescue.

Case in point: this amusing video of two trucks rescuing a Guard vehicle from floodwaters. One, a Cadillac Escalade body with massive monster truck-style wheels, is driven by self-described “rednecks.” It tows what appears to be a submerged Light Medium Tactical Vehicle (LMTV) out of the rising waters, to the bemusement of onlookers:

It's not totally clear what's going on in this video. The swamped vehicle in question appears to be an M1078 LMTV light utility truck, a favorite of both the U.S. Army and National Guard (neither branch returned requests for comment from Task & Purpose). And Michael Keyes, an Army veteran of the 3rd Battalion, 75th Ranger Regiment, posted the video on Aug. 31 with a simple, delightful message: “Redneck Army saves National Guard.”

According to Jalopnik, the occupants of this jacked-up ride are members of the Texas group Rednecks With Paychecks, which took credit for the rescue captured by Keyes, writing on Facebook that “The Rednecks with Paychecks Houston Relief Convoy made the Weather Channel helping out the National Guard.”

Here's another angle on the rescue posted to the group's Facebook page:

Rednecks With Paychecks rolled into Houston on Aug. 29 to assist with search and rescue operations. The group's page is teeming with videos of its members traversing Houston's suffocating new waterways — including the two lifted trucks captured above:

Keyes' celebration of the “Redneck Army” is awesome, but we sort of prefer the caption offered by the anonymous JoeDuo when he posted the video to Reddit: “Only in Texas does the National Guard get bailed out by a bunch of rednecks with lifted trucks.”