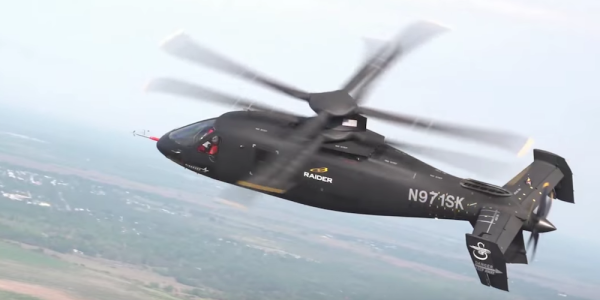 The two-and-a-half minute video uploaded to YouTube on Tuesday shows the coaxial chopper flying with wheels down and up, views from the cockpit as test pilots take notes, and multiple shots of the aircraft as it soars over the airport and surrounding environs.

The video comes barely a week after the company released three-and-a-half-minute animation of its proposal for an assault and attack variant of the SB>1 Defiant, a large coaxial design it’s pitching for the U.S. Army‘s Joint Multi-Role (JMR) technology demonstrator and Future Vertical Lift (FVL) programs.

The Raider was initially designed for a $16 billion U.S. Army weapons acquisition program called the Armed Aerial Scout to replace the OH-58Kiowa Warrior, one of the smallest helicopters in the fleet.

While the service put that acquisition effort on hold due to budget limitations, Sikorsky, maker of the Army’s UH-60 Black Hawk helicopter and other aircraft, still plans to sell the coaxial design in the U.S. and abroad, and the firm along with its suppliers have spent tens of millions of dollars developing the technology.

Textron Inc.’s Bell Helicopter unit, meanwhile, is developing the tilt-rotor V-280 Valor for the JMR program and wants the Army to select its product to replace the Black Hawk helicopter as part of the Future Vertical Lift acquisition effort.

With a Valor first flight scheduled for later this year, one can’t help but wonder if Lockheed is trying to hammer home to Army officials and others the idea that its prototype is already flying.

One reader, however, pointed out that Bell officials have repeatedly said the V-280 is on track for completing first flight this fall and that Boeing officials have privately hinted that the date for Defiant’s first flight might be slipping — potentially by more than a year.