Special forces vehicles could soon be outfitted with a new guided-rocket system based on the unguided rockets that have been... 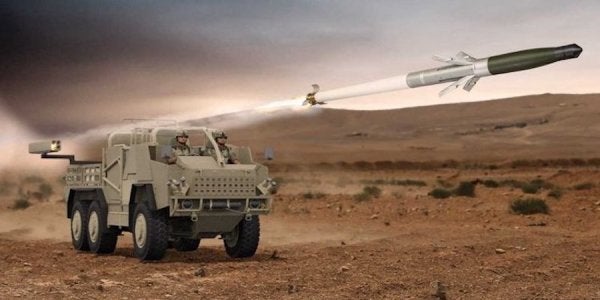 Special forces vehicles could soon be outfitted with a new guided-rocket system based on the unguided rockets that have been a mainstay on fixed-wing aircraft and helicopters.

Arnold Defense, a St. Louis-based weapons maker, is working with other defense firms to produce the Fletcher, a weapons system firing 2.75-inch guided rockets that can be mounted on land vehicles and potentially on platforms designed for open-water and close-to-shore operations.

The company and its team plan to demonstrate the system during the Defense and Security Equipment International showcase this week in London, and it expects other partners to join the project during its development.

Arnold is the world's biggest supplier of rocket launchers, according to Defense News, and it has made more than a million of the 2.75-inch rocket launchers for the U.S. and allied militaries since 1961.

“Moving that success into the land environment with our 2.75-inch rocket systems fitted to wheeled and tracked vehicles, as well as in a dismounted role, will provide ground forces with an entirely new capability,” Arnold CEO Jim Hager said in a release, adding that the company hoped to have the system on sale by the end of 2018.

Unguided 2.75-inch rockets have long been used by aircraft, traditionally for suppression. Weapons makers have developed guidance systems, like BAE Systems' Advanced Precision Kill Weapon, for those rockets, and Arnold told Defense News that its new system will work with any of the currently available systems.

“Fletcher employs an existing suite of guidance modules, motors and warheads which are already used in well-known programs and are readily available to global forces,” the company said a release, adding that the system would have a range of up to 4 miles.

The U.S. military, among others, has been seeking ways to upgrade the weaponry and defenses on land vehicles for some time, largely in response to ongoing threats in Europe.

U.S. soldiers from the 2nd Cavalry Regiment recently tested two new variants of the Stryker Infantry Carrier: One equipped with a 30-mm cannon and another outfitted with Javelin antitank guided missiles.

Though the variants do not make the Stryker into a fighting vehicle, the deputy commanding officer of the 2nd Cavalry Regiment said their development was “directly attributable to Russian aggression.”

The new versions of the vehicle are being tested stateside, but the 2nd Cavalry Regiment will field them in Europe next summer.

Russia also plans to equip its new Armata tanks with active-protection systems, which are designed to counter anti-tank and anti-armor weapons. The U.S. and its allies have followed suit, and some militaries are looking for upgraded weapons to counter APS.