Videos on social media appear to show Russia's Su-57, a prototype of a new, fifth-generation fighter jet, operating in Syria... 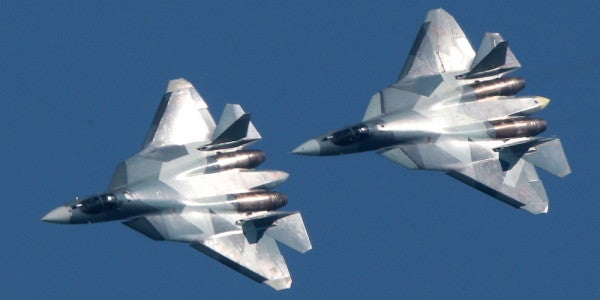 Videos on social media appear to show Russia's Su-57, a prototype of a new, fifth-generation fighter jet, operating in Syria — and it could be a direct threat to U.S. stealth aircraft like the F-22.

Justin Bronk, a combat aircraft expert at the Royal United Services Institute, told Business Insider that initial attempts to geolocate Su-57s shown in the video indicate the deployment may be authentic.

He also said any deployment could be a cynical move to boost Russia's military sales while gaining valuable intelligence on the F-22.

“Russia has deployed pretty much everything in its arsenal in Syria, whether they're prototypes or heavy strategic bombers in absurdly inefficient strike paths all around Western Europe and through the Mediterranean” to strike targets in Syria, said Bronk.

Indeed, Russia often uses Syria as a showroom for its military exports.

It has deployed advanced, complicated systems like submarine-launched cruise missiles, which are designed for high-end naval warfighting, against unsophisticated, basically defenseless targets in Syria.

Bronk assessed that Russia wants to boost its position in the export market, and by deploying the Su-57, a prototype without its proper engines or stealth configuration, it can now claim the platform is “combat proven.”

Though the Su-57 is “certainly not combat proven in the sense of showing it can take on Western fighters,” which is its intended purpose, the plane technically will have participated in combat.

But while the Su-57 poses no real air-to-air threat to western fighters in its current, unrefined state, it has a diverse array of powerful radars Russia could use to perfect anti-stealth techniques and battle plans against the US's F-22.

According to Bronk, one of the main challenges for the Su-57 is integrating the plane's “really quite innovative radar arrangement.” He said it would be a great opportunity for them to test out the configuration in Syria, where a large number of F-22 stealth jets operate.

“The skies over Iraq and specifically Syria have really just been a treasure trove for them to see how we operate,” Lt. Gen. VeraLinn “Dash” Jamieson said at an Air Force Association briefing hosted by the Mitchell Institute for Aerospace Studies in January.

“Our adversaries are watching us — they're learning from us,” said Jamieson. With the apparent deployment of the Su-57, Russia may be teaching its best pilots in its newest plane how to stalk and fight F-22s, which would rely on stealth as their major advantage in combat with more maneuverable Russian jets.

But Bronk said the Su-57s in Syria were a “double-edged sword.” Not only will Russia scope out the US's stealth fighters, but their presence in Syria would “give the US a chance to see how the F-22s respond” to Russia's new jet and “allow western aircraft time to collect signals intelligence on what those radars are doings.”

Marketing ploy for a prestige plane?

Overall, if Russia does have Su-57s in Syria, it's likely a marketing ploy to increase exports as Russia's economy flags under weak oil prices. Though Russia often hypes the Su-57, it has only ordered 12 of them and “desperately” needs an investment from India to bump up production, said Bronk.

“They're ordering 12 of them,” said Bronk. “How can you sustain a genuine program when your order book is so tiny? In a state that has huge budget problems and a massive military bill,” the Su-57 functions as a prestige item, said Bronk.

So while all hell breaks out in Syria, and hundreds of civilians fall victim to airstrikes from Russia's ally, Moscow may be using the opportunity to show off shiny new hardware and gain a military edge against its US competitor.