My quads were burning and my breathing was steady but labored as I ascended yet another hill on the rural... 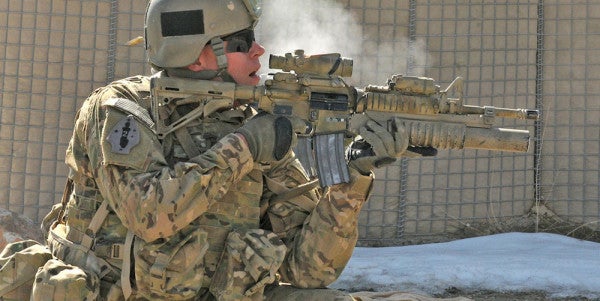 My quads were burning and my breathing was steady but labored as I ascended yet another hill on the rural gravel road I was running on. A little over halfway to my destination, I couldn’t help but think about how the hills didn’t look too bad when I drove this same route a day earlier. A mile isn’t usually a big deal for anyone in even remotely decent shape, but I wasn’t doing an average run through the park either. For the first time since I was in the military, I was competing against myself with a stress shoot.

Many people who carry a gun for work or personal protection separate their physical fitness and firearms training into two separate tasks. A pleasant day at the range is perfect for fine-tuning shooting fundamentals, but if you are ever in a threatening situation that calls for a response with a firearm, you will probably be dealing with a surge of adrenaline and nerves. So why not train like you fight and combine marksmanship with physical fitness in a “stress shoot” once in awhile? It’s not an exact replication of combat, but it’s about as close as you’ll get while still training safely.

Combat-arms units in the military regularly implement this kind of training because they know troops likely won’t be well rested when they engage the enemy on the field of battle. Soldiers in buddy teams or four-man fire teams will typically start a stress shoot off with either a kit run or a ruck march to the range. After they arrive, a series of targets at various distances must be accurately engaged while shooting from the prone, kneeling, and standing positions. Some stations will be static, while others will require the shooter to walk forward or sideways, or even perform calisthenics before engaging targets. Barriers like walls or cars are positioned to provide additional obstacles for the shooters to negotiate. Speed and accuracy are recorded so that the top teams can be recognized, sometimes with a day off for winning.

For the stress shoot I conducted, I wore a plate carrier that I borrowed from a friend, as well as a full camelback. I carried an AR-15 slung in the low ready with 10 rounds loaded in a 30-round mag in the well (nothing in the chamber, of course), and three more 30-round mags on my chest with 10, 11, and 30 rounds respectively. I had a fully loaded Glock 22 holstered on my belt along with two additional 15-round magazines loaded with six rounds each to complete the ensemble. A mile from my point of departure, I had prepared a series of targets in 10 lanes ranging from five meters to 100 meters away.

As soon as I finished the run, I immediately had to engage two e-type targets in lane one with three rounds each from my rifle and then transition to my pistol to put three more rounds each into the silhouettes. I conducted a series of drills in the next nine lanes that challenged me with targets at various distances while shooting from four different positions. I incorporated frequent magazine changes, transition drills, and malfunction drills. I didn’t have any barriers, but on lanes three, six, and nine, I had to complete 10 burpees before starting the drill to ensure my heart rate stayed elevated. In an attempt to add another layer of stress, I instituted a 20-minute time cap to complete the run and the 10 lanes.

That’s how I designed my stress shoot, but you can tailor yours to what resources you have available as well as your training goals. As with all firearms training, safety needs to be your first consideration. Make sure all of your targets have a safe backstop, and that all targets are positioned so that you are firing down range. It’s a good idea to rack a round into the chamber only after you have arrived at the designated area you will be shooting. After that, creativity is your only limit. Try to incorporate the firearms that you use most often, and challenge yourself with transitions, positions, and physical activity. You can even implement other skills, like common medical tasks or breaking down and putting back together your rifle or pistol (always perform a functions test before re-loading).

At the end of the event, you will know exactly how you perform while physically exerting yourself and you’ll identify areas of weakness you need to focus on in future training sessions. As the common military saying goes: The more you sweat in training, the less you will bleed in combat.

As for me, I need to go do some cardio and practice my pathetic mag changes.