The U.S. Navy just took delivery of the world's most advanced aircraft carrier on Wednesday, the service said in a news... 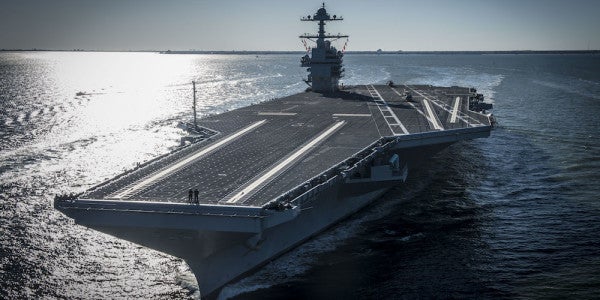 The U.S. Navy just took delivery of the world's most advanced aircraft carrier on Wednesday, the service said in a news release.

The future USS Gerald Ford (CVN-78) finished acceptance trials under the shipbuilder, Newport News Shipbuilding, on May 26. Soon after those trials, which tested and verified the ship's basic motor functions, the Navy officially picked up the ship from the builder, representing the first new aircraft carrier for the service since 1975.

The Navy plans to officially commission the Ford into the fleet sometime this summer.

The Ford is packed with plenty of new technology and upgrades, like a beefier nuclear power plant that can handle lasers and railguns. It also has a larger flight deck with an electromagnetic aircraft launch system, which can handle more wear and tear from launching jets off the deck than older steam-powered systems.

“Over the last several years, thousands of people have had a hand in delivering Ford to the Navy — designing, building and testing the Navy's newest, most capable, most advanced warship,” Rear Adm. Brian Antonio, program executive officer for aircraft carriers, said in a statement. “Without a doubt, we would not be here without the hard work and dedication of those from the program office, our engineering teams and those who performed and oversaw construction of this incredible warship. It is because of them that Ford performed so well during acceptance trials, as noted by the Navy's Board of Inspection and Survey.”

Besides being the most advanced ship ever built, it's also the most expensive: The final tally to build it came just shy of $13 billion. Still, with its high-tech gear, the Navy expects to save about $4 billion on this ship over its lifetime since it has more automation and better systems.