The U.S. Naval Institute recently released a video of the USS Carl Vinson (CVN-70) patrolling the Philippine sea with four... 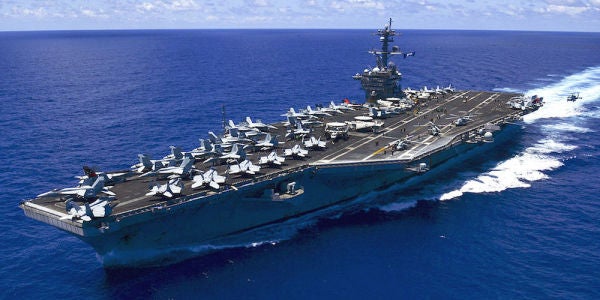 While the Vinson is a long way from home, it's toured the Pacific for decades and never once had to fear for the 70 or so aircraft on board and 7,000 or so sailors working above and below the deck for one big reason — it's escort of the world's most advanced fighting ships.

The Japanese ships excel in anti-submarine and anti-surface warfare with powerful missiles, the U.S. destroyer and cruiser can slap down nearly any threat headed their way with their advanced Aegis radars and interceptor missiles. Furthermore, the United States frequently sails with navies across the Pacific, honing communications and skills in the event that they ever need to fight together.

A core tenant of the U.S. Navy, despite having the most and best ships in the world, is to never go it alone. Anywhere the Vinson sails, expect to find guided-missile destroyers armed to the teeth and ready to defend the Vinson while dealing some damage of its own to whatever enemy it may encounter.