Is The Army’s Command And General Staff College Refusing to Admit Pregnant Officers?

Last year, several pregnant officers were informed upon arrival to CGSC that due to their physical state they would not... 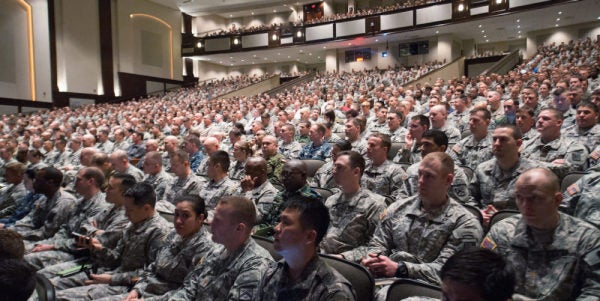 Last year, several pregnant officers were informed upon arrival to CGSC that due to their physical state they would not be allowed to attend.

School leadership informed one of us, Maj. Jenny Gunderson, that she could not start the course and would have to disenroll—but, they added if she were to come back next week and not be pregnant, they would reconsider. She asked if they were insinuating she should get an abortion, to which she received no response. Maj. Maryorie Hegard was informed she wasn’t allowed to start school in her condition; Maj. Jamie Spayde was informed she had to defer and was required to sign a statement of deferral.

The school’s reasoning for deferment and disenrollment was due to a policy regarding anticipatable absences. All three successfully fought the policy and graduated.

CGSC is using a specific policy to keep pregnant servicemembers from attending an accredited academic institution. This policy conveys the message to students that military service is incompatible with having a family. Servicemembers want to come forward to discuss with leaders but are fearful of retribution.

Since the DoD increased maternity leave to 12 weeks in 2016, CGSC has attempted to write multiple versions of a policy that, on the surface, appears to be gender neutral. Even though there has never been a problem with pregnant servicemembers completing course requirements, CGSC has created a policy that prevents pregnant students from attending in the first place. The stated purpose of the policy is student accountability and absences. However, when the policy is put into practice, it clearly discriminates against women entering CGSC while pregnant.

Current policy references the Academic Misconduct Investigation and Dismissal/Release Procedures, a bulletin which provides guidelines for dismissal for those with extended absences (previously anticipatable absences). Essentially, pregnant servicemembers are lumped in the same category as those who are dismissed for academic misconduct. Yet at the same time, every year students receive permission to miss classes to report early to their next assignments, attend selection courses, or participate in other extraneous programs with no penalty or threat of disenrollment.

Interestingly, female officers are often informed by their service and/or command that CGSC is the perfect time to have children. Yet, once they arrive they are told the opposite. In fact, a number of pregnant female students who are selected to attend CGSC are either informed they are not allowed to attend or are disenrolled prior to their arrival, without their knowledge. CGSC has essentially created a problem that did not previously exist. They are failing to look at the unintended consequences of this policy. This is apparent as they have ignored the population the policy is placing at a disadvantage – the students.

CGSC is using the keyword “selection” as a loophole in their interpretation of a directive from the Secretary of Defense, which is a DoD-wide standard for 12 weeks of non-chargeable maternity leave, stating that:

In essence, they can’t stop them from being selected, but they can try to prevent them from attending.

For an accredited college to discriminate against pregnant women is wrong. This would be similar to Kansas State University kicking out graduate students because they are pregnant. Shortcomings like these have been repeatedly addressed with CGSC leadership to no avail.

CGSC policy is taking away choice from servicemembers and does not live up to the Army values. Instead of discriminating, policy should focus on setting conditions for the future. Finally, we hope leaders within the school ask two questions when deciding the fate of this policy: 1) What message is being conveyed and to whom is it being conveyed? And 2) What is the right thing to do?

Servicemembers such as U.S. Army Majors Gunderson, Hegard, Spayde, and many others not only graduated, but completed all course requirements while geographically separated from their spouses and raising their newborns on their own. Yet, none of these success stories were supposed to happen.

Major Jenny Gunderson is an Army Strategist and former Aviation Officer. She has served in numerous staff and command positions. She holds a BA in Economics and Political Science from Wake Forest University and is pursuing a master’s degree at Columbia University this fall. The views expressed here are those of the author and do not necessarily represent the views of the United States government. Major Jamie Schwandt is a U.S. Army Red Team Member and an adjunct professor, with a doctorate from Kansas State University. This article represents his personal views, which are not necessarily those of the U.S. Army.