Book Excerpt: What Can An Academic Tell American Soldiers In The Field?

It was near the end of the evening commander’s update briefing on 6 June 2010, and her audience included dozens … Continued 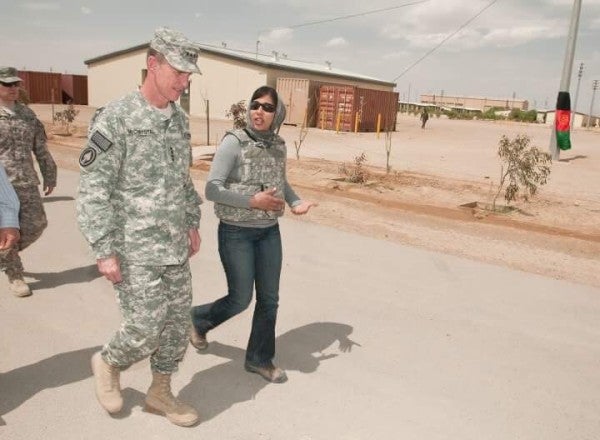 It was near the end of the evening commander’s update briefing on 6 June 2010, and her audience included dozens of staff officers in various combat uniforms. Hundreds more joined via videoconference from the regional commands in Afghanistan and NATO bases around the world. ISAF commander General Stanley McChrystal sat solemn-faced at the hub of a U-shaped array of plywood tabletops arranged to give him eye contact with his closest advisors. The woman called up the first slide of her presentation: the impact of civilian casualties on insurgent violence across Afghanistan. Many in the audience were skeptical. What could a young academic with no operational or field experience tell them about civilian casualties — a challenging and sensitive topic — that they didn’t already know? In a crisp, professional tone she presented the key finding: On average, civilian deaths caused by ISAF units led to increased attacks directed against ISAF for a period that persisted fourteen weeks after each incident.

The woman was Radha Iyengar, a Princeton-trained economist and then assistant professor at the London School of Economics, who had come to Afghanistan as part of the Counterinsurgency Advisory Assistance Team (CAAT), a new unit General McChrystal had created to help ISAF leaders at every level identify and implement best practices in counterinsurgency. The CAAT was led by Joe Felter, a U.S. Army Special Forces colonel — one of the authors of this book. On taking the position, Felter, himself a Stanford PhD who had earlier analyzed the sources of military effectiveness in counterinsurgency, had quickly realized that his team at the CAAT could benefit from some assistance with data analysis, modeling, and research, so he invited Iyengar and other volunteer academic researchers to spend time supporting the CAAT mission, including the other two authors of this book, Jake Shapiro and Eli Berman.

McChrystal tapped his microphone and directed the audience dialed in from multiple ISAF regional commands across Afghanistan as well as NATO countries in Europe and North America to take notice. Iyengar was presenting a graph indicating the expected increase in violence of different kinds after an ISAF-caused civilian-casualty event. Reducing civilian casualties was not only a moral imperative, it was also, he believed, a key to strategic victory.

General McChrystal was convinced that civilian casualties incurred in operations led to more damage and ultimately to more ISAF casualties. He and his advisors had encouraged commanders to assume increased tactical-level risks in the short term in some situations — such as minimizing use of air strikes and artillery for force protection when civilian lives could be at risk — in an effort to foster the relationships needed to secure critical long-term strategic gains. He had called this “courageous restraint” — accepting increased risk at tactical levels so as not to undermine strategic goals — and the idea became a hallmark of McChrystal’s tenure as commander.