‘I Was Sh*tting All Over Their Country’: Doing My Doody On An Iraqi Roadside

Here’s the second entry in our Combat Pooping contest. Not funny like the first one, but quite … pungent. If... 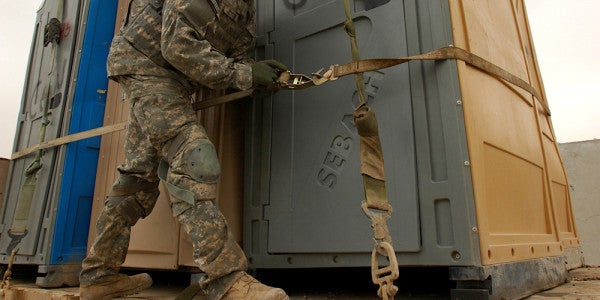 Here’s the second entry in our Combat Pooping contest. Not funny like the first one, but quite … pungent. If you have something you think is as good, please e-mail it to Tom Ricks. Like Nike says: Just doody it!

People often want to know what Iraq was like, but they don’t want to hear that sometimes in order to survive, you may have to kill. And being as that I have become arguably addicted to the transcendent truth found in confrontation, I tend to revel in it.

As others squirm to find a way to politely remove themselves from my presence, I gravitate toward the conflict with a continuous sense of excitement. Because the real truth is they don't really want to know what it was like. They want to feel good about themselves and show “support,” but rarely do they desire the details of reality. They want us to be the heroes they are told we are, that they may truly believe we are. The truth is, we are just humans who fought other humans for survival.

I had my epiphany on my third deployment. I had decided I no longer worried about if or when or how the enemy may kill me, instead I would focus on survival and hold dear the small moments of comfort or joy that I found.

While on another logistics patrol, I could feel the shit about to explode from my asshole. Thankfully at this point, I had enough rank to stop the convoy. Before I dismounted my vehicle, I looked for any indicators of IED (Improvised Explosive Devices) or EFP (Explosively Forced Penetrators which are basically IEDs with a copper shape charge). Feeling satisfied, I quickly moved to the ground, completed another 360-degree scan of the area and let my driver know I was about to shit. They acknowledged and continued to provide overwatch as I expeditiously removed my protective gear.

With little time to spare, I was able to squat and lean against some tires before my anus erupted with shit pouring out of it at high velocity. I was lost in the deluge of defecation, wiping my brow from the buckets of sweat now also pouring out me. I could hear another sergeant telling me to, “get my fucking gear on you crazy asshole.” To which I replied frankly that if I was going to die while shitting, I would do so as comfortably as possible.

It was at this moment I looked up and saw the eyes of hosts staring at me. An Iraqi family had come upon our convoy and been directed to the side of the road. I had been so focused on not getting any shit on my boots I had failed to notice their presence. Mommy and Daddy and little Susie and Timmy Al Qaeda all looking upon me in my moment of half-nakedness. We all just gazed waiting for the other to look away.

I took a deep breath and continued my body's purge and I could feel the truth in the moment. I was shitting all over their country. Not just in that moment, but every day I was there fighting for survival, marking my territory as the predator I was.