Thus endeth the contest that went where military journalism hasn’t gone much. And apparently you neither, given the paucity of... 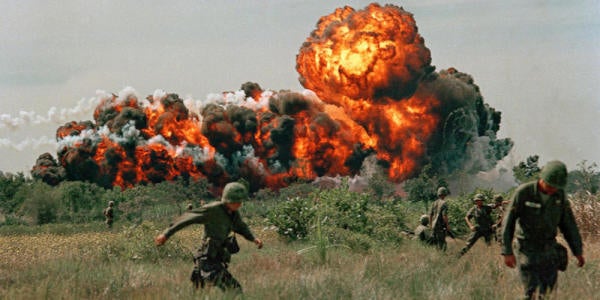 Thus endeth the contest that went where military journalism hasn’t gone much. And apparently you neither, given the paucity of submissions.

The morning of January 1st, 1968, began early and hot. My bed had been the ground laterite of the newly bulldozed berm at the Xuan Loc Airfield. It was occupied by my unit, the 52nd Vietnamese Ranger Battalion — or what was left of it.

Tet had struck the day before, and half the unit had been airlifted to Baria to relieve the province chief’s house. In mid-lift, the remainder of the battalion was suddenly directed to occupy the airfield as it was under sporadic attack from the VC. The Tet Offensive had begun.

The previous night we were under constant assault from all quarters of the city including a mass wave attack across the runway which we only tenuously held with the superb assistance of the 175mm guns adjacent to us which with zero elevation and a healthy dose of nose plugs, had swept the charging VC from our front. Day One ended well into Day Two.

Day Two started early with little time for a normal routine. I did not bother to shave, and with the battalion commander, had a large cup of GI coffee and several Pall Mall cigarettes. He laid the map out on the ground, and as we bent over it, he outlined his plan and what he expected the VC to do.

The troops would be re-configured to the south and west adjacent to a rubber plantation and block the main road into Xuan Loc QL 1. Here, he anticipated the next and strongest attack. He opined that the previous night was more of a probe than a serious assault and that tonight, the real assault with Main Force troops would take place. He fingered the French plantation compound as the main VC HQ with the highway and railroad as the primary direction of the force. Here, we would stand.

We moved to the building and went inside. It was poured concrete with only the floors and portions of the walls complete. The entire interior still had the rude logs and planks used to reinforce the cement forms. The windows were simply open rectangles. All around each floor were the work scaffolding leading in various plank paths to the work yard below. The CP was set on the 2nd floor, center, with a good 180-degree view. Machine guns were emplaced on the roof, as well as, on the first floor. Mortars were dug in just behind the building.

I began to feel the effects of the coffee by mid-morning but ignored them for more pressing business.

I had to visit the MACV compound to address our new dispositions. Then, the artillery battery to thank them for the previous night and work on the concentrations for our new positions. This resulted in a quick lunch of pork steak and gravy in the battery FDC and a readdressing of my more basic internal urges.

Still suppressed, I returned to our CP to go with the battalion commander to the 18th ARVN Div HQ for the general area defense brief. This was a mixed US and ARVN audience, now packed very tightly with multiple visitors. I began to squirm and move in my chair but was not able to depart as we were on the front row and often queried.

Finally, there was a break, and I dashed for the latrine. I was greeted with two bomb site toilets—both of which were piled high with feces. The stench was overwhelming and flies circulated in a great fleet. I determined to wait until I could get to the MACV compound. Movement to and from the conference room provided a momentary respite.

Very soon, in mid-conference, we were alerted by shots, incoming mortar rounds and suddenly buzzing radios. The room immediately evacuated, and we raced to the hotel CP.

On arrival, we were already receiving rounds, and the forward OPs had been engaged and retreated to our defensive positions. It was now about 1630.

Immediately, I began coordinating with the L19 overhead for spotting along the highway and railroad. I also worked the landline to the Heavy Battery which was less than 1,000 meters from our position. In the flurry, I chain smoked cigarettes, worked the radios, and suppressed increasingly stronger urges.

By 1900, it was getting dark, and small arms routinely rattled on the ceiling and walls of the hotel. Firing became increasingly intense with the VC green tracers becoming a dominant color theme as night descended. By this time, I had to make a maximum effort to restrain the deep cramps and internal pressures. There was no place to go and too much to do. Taking a break and digging a cat hole was out of the question. Tracers criss-crossed the field behind the hotel, and mortars routinely impacted. The rear was as dangerous as the front.

By 2200, both the enemy and my bowels reached a climactic moment. I called for Final Protective Fires with the 8” guns at the battalion commander’s request. These impacted to both sides of the hotel just within the woodline. We could see the silhouettes of VC, and a wheeled machine gun blasted into the air.

Concurrently, running up the plank treadway from the ground to our location, several VC charged into the open window. I fired on full automatic as did several of the battalion commander’s bodyguards. The VC dropped onto the empty window frame and bled out on the interior wall and map board. The shotgun carried by the lead VC rattled along the floor.

Suddenly, I could suppress no longer what nature had urged several hours ago. Without a word, I walked rapidly to the back of the floor, and absent any thought of selective positioning, I just dropped my trousers, grabbed the unfinished lip of a rear window, and let fly on the floor.

It came in a huge spontaneous burst, and after several relieving spasms, ceased. I extracted a roll of C ration toilet paper and cleaned as best I could—my attention now diverted back to the action at hand. Immensely relieved in more ways than one.

Despite all mortal reasons not to, I finally succumbed to the most powerful force on earth—a shit whose time had come.

This is a true story.