‘Darkest Hour’: Good Film, But A Couple Of Historical Concerns 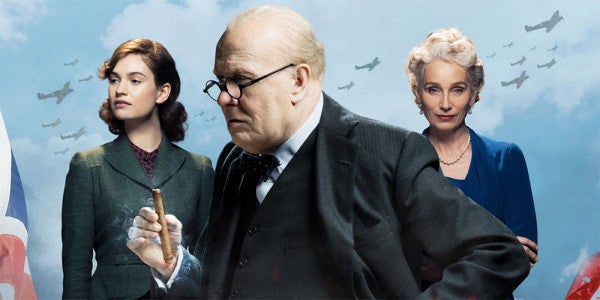 I enjoyed this cinematic summary of Winston Churchill’s rise to power in May 1940 and his actions in the weeks after. It is an amazing tale, I think the leverage point of the 20th century, and the movie generally does it justice. (That period also was my favorite section to write in my enjoyable book Churchill and Orwell—see pp. 89 ff.)

I also was pleased by how much the movie got right, down to what Churchill had for breakfast on May 10, 1940. So I give it two Long March boot thumps.

But there were two scenes that were weird, and that’s important, because both are presented as key. The first is when Churchill takes a ride in the London Underground and is inspired by the desire of the commoners to resist the Nazis. That never happened. But I was willing to accept it as a poetic summary of the politics of the time, which were that the English people trusted and supported Churchill much more than did his party (Conservative) or his class (aristocratic).

There’s a second scene that is more problematic. It shows the king visiting Churchill to buck him up. To my knowledge, that also never happened. Maybe I missed it somehow, but I’ve read perhaps a hundred books about this period. This bothers me especially because the royal family has never entirely owned up to some of the positions taken by its members around this time, from what I hear.

There’s also an omission that surprised me. The last thing that Churchill did on May 10, 1940, late that night, was to meet with a senior British intelligence officer about how to bring the United States into the war. That was a very important move, because it highlights two key aspects of Churchill: His strategic understanding, and his stamina. He saw coming into office that Britain could hold off Germany for awhile, but that without America being involved, it could not prevail. And just the fact of his holding that meeting at the end of a long and tumultuous day also shows his enormous energy.

Indeed, even as he rallied the nation and consolidated his political position, he got the British establishment onto a war footing, which just by itself was a major achievement. Yes, they had been at war for seven months when he took power, but much of the government was just chugging along as if it were business as usual. Churchill changed that with his dynamism, exemplified by the “Action This Day” stamp he used on many of his memos.

Odd note: Watching the movie, I knew about half the dialogue before it was said. This is because the writer used Churchill’s speeches, but also turned diary entries and letters into dialogue.

Related odd note: A few days later, my wife and I went to see The Post. It had an anachronistic note to it — it felt almost like a movie from the 1940s, like Mr. Smith Goes to Washington. But the acting was terrific. The odd aspect of it was that over the course of my life I have conversed several of the people portrayed — Ben Bradlee, Katherine Graham, Meg Greenfield, even (for a moment) Richard Nixon. Having known these people, I was particularly struck by how Tom Hanks totally made me believe I was looking at Bradlee, and Meryl Streep did the same with Mrs. Graham. Both captured the quirks, mannerisms, and personalities that I sensed in real life. Bradlee indeed reminded me of a pirate captain, something mentioned in the film, so I guess it wasn’t just me who felt that.