Hollywood Has Too Few Military Veterans. ‘Discharged’ Is Changing That

“Discharged,” the animated TV pilot about four veterans moving to Hollywood, recently premiered at the Hoboken International Film Festival in... 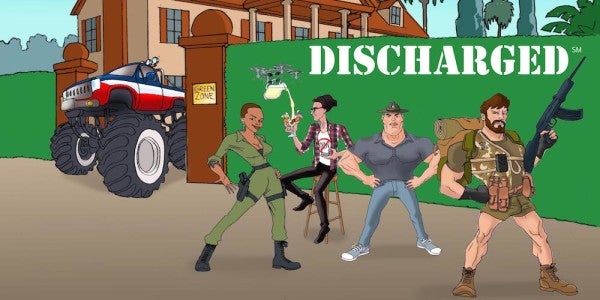 The pilot was produced, written, and directed by Jas Boothe, a former Army Major, former homeless veteran, and founder of Final Salute, Inc., a nonprofit dedicated to helping female veterans find safe and affordable housing. She is a speaker, was featured in the documentary, “Served Like a Girl,” has appeared on “Oprah,” and is a CNN and People Magazine “Hero.” Voices are provided by former Marine Corps combat veteran Michael Penney, former Infantry Scout and Purple Heart recipient Jonathan Lopez, former National Guardsman and Purple Heart recipient Earl Granville, and Jas Boothe herself. The pilot also features music provided by veterans turned recording artists, Cowboy Jax and Idris Ward-El. The animation was done by 19-year-old Lealie Hayek.

The episode chronicles the antics of four veterans as they transition from their “not-so-honorable service” into the self-centered world of southern California. The glue holding them together is the hyper-masculine marine, Axel (Penney), who lands a job as a Hollywood stuntman after discharge from the Marine Corps. Rather than hire Hollywood professionals for his management team, he brings along his four friends, Jesus (Lopez), Brandon (Granville), and Major (Boothe). In the pilot, we see them settle into their new home and clash with the bougie denizens of SoCal. A series of flashbacks explain how the characters met.

“Discharged” holds a great deal of promise. With a strong premise, an accurate voice, and a sincere message, any network would be lucky to have it. The film and TV landscape is starved for military and/or veteran representation, and the success of “Terminal Lance” shows that the audience is there. A show like this that speaks the military language while offering a unique presentation will likely find success with the 1 million active duty and 21 million veterans that watch TV. A google search for, “animated military comedy,” yields only one result: “Sgt. Stubby: An American Hero,” a film about America’s most decorated military dog.

Authenticity is woven into the fabric of the project. Watching the episode is like sitting down in the mess hall where conversations are laced with profanity, self-deprecation, innuendo, and racist banter. It’s bold in an era of safe comedy, but all done in good faith. The episode works to establish the camaraderie that makes this kind of ribbing acceptable. Like many veterans, these characters bounce insults off each other as a way to deal with traumatic experiences.

The choice of an animated show is particularly strong. The strength of animation is its ability to depict an exaggerated reality safely divorced from our own. These cartoon veterans are allowed to tout patriotism, while at the same time parody its excesses.

However, the pilot leans a bit on tired jokes. If you are at all familiar with military culture, many of the gags will be familiar. Any mention of Coast Guard gets a hearty laugh. Axel, the Marine, sleeps with anything that moves. (“She’s legal!” He declares after learning that the neighbor’s hot daughter is in college). Brandon, the “resident POG,” suffers to explain the difference between World of Warcraft and League of Legends to his grunt friends. Jesus, the ex-Drill Sergeant, is a stickler for the rules and berates his compatriots for failing at morning PT. Every civilian, except the women Axel porks, is a nasal-voiced dweeb.

That said, behind each caricature is a sincere effort to capture serious issues facing veterans. The show mostly succeeds with this balance. Axel suffers from PTSD, and his promiscuity is likely a coping mechanism. Jesus is a double amputee, and was homeless for many years. Brandon self-medicates, but is a good caretaker.

That aside, other clever moments scattered throughout the pilot show a devilish, quirky sense of humor. At one point, the painfully white “spook,” Brandon, raps out the menu for the lavish breakfast he’s prepared for his friends. The performance by Granville, coupled with the 90s hip-hop animation, make for a great sequence.

“Discharged” is an opportunity to fill in a missing voice in the media landscape. Outside of war fetish films and PTSD documentaries, veterans are hard pressed to find characters that represent them. As Jas Boothe says, “the Hollywood veteran voice is a distinctly male voice; I believe that anyone who has served and sacrificed for their country has earned a voice.” This show is a chance to add a new layer to the country’s understanding. It is therapeutic for veterans to hear funny voices process familiar trauma. It is important for civilians to see the more human failings of veterans, and be equally entertained. Like veterans themselves, the show embraces its characters’ flaws, while still holding fast to the loyalty and frustrated optimism that unites people in uniform. While the execution is imperfect, with time, I believe that this show can become a touchstone for military comedy in the future.

The pilot will show again at Gen-Con in Minneapolis on August 4th.

David Polsdorfer co-holds the Navy chair in the Long March's Council of the Former Enlisted. He was a “Brandon,” serving as a Signals Intelligence analyst for five years in Hawaii with one deployment to Afghanistan. In 2016, he graduated from Columbia University, and now works as a freelance writer and editor in film and television. His film and TV work include documentaries such as “The Newspaperman,” “Tickling Giants,” and “America Inside Out with Katie Couric.”