Dyngo The War Dog Is Having Trouble, And We Could Use a Little Help

The morning after Thanksgiving, my dog, Dyngo, was having trouble walking. He’s a strong, happy dog, so with some coaxing,... 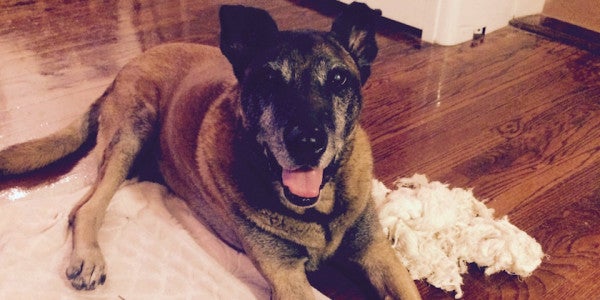 The morning after Thanksgiving, my dog, Dyngo, was having trouble walking. He’s a strong, happy dog, so with some coaxing, he managed a walk outside. By that evening, he couldn’t stand, laying with his eyes closed, crying — something he never does. I sat on the floor stroking his large head, crying too because I thought he might be dying.

We made it to the emergency animal hospital and, after a host of tests, were given relatively good news: Dyngo had a large, infected abscess in his right leg above his elbow joint. The infection would resolve with antibiotics and the abscess could be removed. Surgery was scheduled for the following week, and we brought Dyngo home. But the next day, his leg swelled three times its normal size, the abscess opened, and we rushed back to the hospital for emergency surgery.

All dogs are special, but Dyngo isn’t like most dogs. Dyngo is a retired Military Working Dog who for ten years was a patrol and explosives detection dog for the Air Force. He deployed to Afghanistan for three combat tours. In 2011, his handler, now-Master Sgt. Justin Kitts, was awarded the Bronze Starfor their 63 outside-the-wire missions, found over 300 pounds of IED material, and were credited with protecting 30,000 lives.

Like many combat veterans, the medical problems Dyngo is facing, are linked to his hard-on-the-body military life sniffing for bombs. It was a life I know he relished right up until the end of his career (watch him with his final handler, Staff Sgt. Nofo Lilo, right before retirement).

Both the first surgery and Wednesday’s surgery to close the wound went well. We’re back home now. But we face two weeks of careful healing to foster: Daily sedated bandage changes, as well as a lot of home care challenges. Hauling Dyngo, a large Belgian Malinois who weighs about 90 pounds, in and out of the house for bathroom break requires the strength and dexterity of at least two able-bodied people.

So far, Dyngo has nine hospital visits, two overnight stays, eight bandage changes, and one surgery. His bills are going to total upwards of $15,000, not including the aftercare he will need from new bedding to custom-fit leg braces.

There are organizations out there, like the U.S. War Dogs Association, a non-profit run by former Vietnam MWD handlers, who help. (They run a program which provides and pays for the essential prescriptions for retired MWDs. Dyngo is a beneficiary of this; his daily medications would otherwise cost likely hundreds of dollars a month.) But healthcare for retired MWDs—their own class of veterans—is not funded.

This week Kitts started a GoFundMe Campaign to help pay for Dyngo’s medical care. Every little bit will help Dyngo—whether it’s small or large donations or helping to spread the word. It is kindness and generosity for which we are eternally grateful.

Over the past two-and-a-half years that Dyngo has been in my care, I’ve focused my energy on getting him comfortable just being a house dog—to enjoy the happiest, most love-filled retirement possible. But now I have to remind myself that he is a war dog who has saved lives—and now he deserves the same.

Rebecca Frankel is the author ofWar Dogs: Tales of Canine Heroism, History, and Love. You will be able to read her in-depth story about adopting Dyngo in the Jan/Feb 2019 issue of “Smithsonian” magazine.