Why Does Everyone In The US Military Hate ‘The Hurt Locker’?

It seems to me that that in military circles, The Hurt Locker was the most hated film in recent years.... 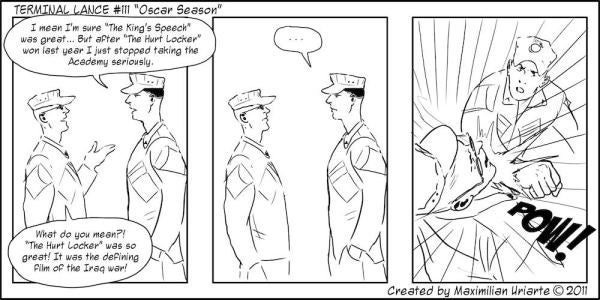 It seems to me that that in military circles, The Hurt Locker was the most hated film in recent years. I confess I really don’t understand why. I mean, you all seem to love Top Gun.

I asked Maximilian Uriarte, the creator of “Terminal Lance,” and he responded:

The main reason most military hate The Hurt Locker is because it’s painfully inaccurate, with realism and even common sense thrown totally out the window, while the film was lauded by critics as being a revolution (Best Picture as well). I admire the film’s cinematography but little more. The most grievous offense though? They show a soldier playing ‘Gears of War’ on XBOX 360. ‘Gears of War’ came out in 2006. The movie takes place in 2004.

What’s your own reason for hating the film? If I get enough I’ll compile a top 10.

(Note: The panel from “Terminal Lance Corporal” is used by written permission of the author. All rights reserved.)