The Best Movie About PTSD Isn’t About War

Tom note: Here is an article by the author of one of my favorite books on PTSD, titled The Evil … Continued 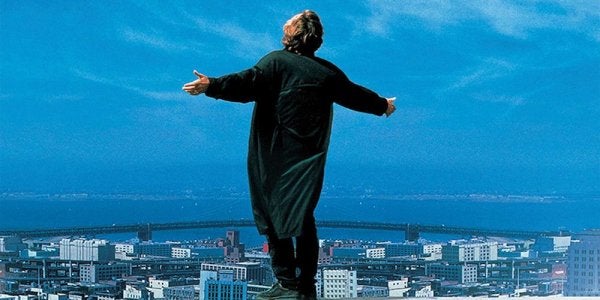 Tom note: Here is an article by the author of one of my favorite books on PTSD, titled The Evil Hours.

We all know that almost all movies about our post-9/11 wars are heinous. So it is perhaps unsurprising that the best PTSD film ever made has nothing to do with war, 9/11, Iraq or America. This film, released eight years before the towers fell, is Peter Weir’s Fearless, starring Jeff Bridges and Rosie Perez. After the constipated patriotism of American films since 9/11, Fearless feels like a breath of fresh air. I could feel myself relaxing, my brain changing within the first ten minutes of the film. Gone is all the red, white and blue bombast. Gone are all the hackneyed scenes of muttering turban-wearing Arabs and IEDs going off in slo-mo. Gone are all the homecoming pancake breakfasts filmed to look like Norman Rockwell paintings brought to life.

Like trauma itself, Fearless begins wreathed in smoke and darkness. Jeff Bridges’ character—a San Francisco architect named Max Klein—is wandering in a cornfield outside of Bakersfield. Soon we see some airplane wreckage. Next, we see that Max is carrying an injured infant in his arms. Behind him is a young boy. Eventually, they bump into a paramedic.

“Were you in the crash?” the paramedic asks.

“No.” Max replies. “I found this baby. I’m trying to find the mother.”

Max’s denial, a classic “Refusal of the Call” a ‘la Joseph Campbell’s The Hero with a Thousand Faces, sets the tone for the much of the movie. As the film makes clear, Max has no desire to be thanked for his service or to be dragged through into the typical psychiatric rituals. Indeed, Max tells us that he doesn’t want to be healed or to return to some idyllic pre-traumatic state. Instead he wants to harness his near-death experience and use its energy to become a better human being.

Having saved two lives, Max does everything he can to run away from his own life, hiring a taxi to get away from the crash site and checking into a hotel, then going on a Kerouackian road trip through the desert in search of a lost lover. After this daylong fugue, civilization (in form of the FBI) catches up to him and sends him back home to San Francisco.

After the smoke of the crash and the open vistas of Max’s road trip, the film moves indoors and a certain pattern begins to emerge—that of the main character visiting the victim’s families and walking down dimly-lit hallways and corridors, always moving forward towards a distant glimmering light. Only later do we learn that Max is haunted by images of The Void, compulsively drawing and re-drawing versions of it, the way Richard Dreyfuss’ character in “Close Encounters of the Third Kind” keeps creating versions of Devil’s Tower in Wyoming. Later in the Fearless, we are shown an idealized version of what Max sees—Hieronymus Bosch’s “Ascent Into The Empyrean.”

One of the most enjoyable aspects of Fearless is its systematic demolition of virtually every PTSD cliché. It’s almost as if the filmmakers went through the Diagnostic and Statistical Manual of Mental Disorders (the bible of psychiatry) and looked for ways to subvert the modern medical view of post-traumatic recovery. In one early scene, a therapist (played by John Turturro), assigned by the airline to play minder to Bridges’ character tries to explain his hostility toward the various lawyers and do-gooders who are hounding him.

“How would you know? We just met!” Max replies.

Later we learn that Max believes that the plane crash is “the best thing that has ever happened to him,” and that “he died during the crash and passed through death to the other side.” Like some survivors of World War One, Max emerges from his trauma into a kind of mythic no-man’s land, trapped between two worlds—fated to be dead, yet still alive. Believing himself to be invincible, Max declines therapy, choosing instead to embark on a kind of demented personal vision quest—walking across busy freeways, dancing atop skyscraper ledges, driving his car into brick walls, wondering when God is finally going to finish the job.

Despite this fixation on death, one of the recurring themes of the film is the joy of life.

“I walked away from that crash with my life. That’s what survived—the taste and touch and beauty of life,” Max says to his wife played by Isabella Rossellini towards the end of the movie.

Even though Max remains tragically alone throughout most of the film, we are never made to pity him. Instead, we are shown a traumatized character with agency and will, watching as he rises phoenix-like from the fire of the plane crash, searching for the meaning of every human gesture, and in turn for the meaning of life. In this way, Fearless becomes a kind of coming-of-age film. Unlike so many war / PTSD films today, it doesn’t try to reassure us, or force feed us martial platitudes. It doesn’t get distracted by the patriotic bunting. Instead it throws us into the middle of one of life’s greatest questions—how do you live after you’ve almost died?

It’s a rare film that actually teaches you something about the world, but Fearless taught me several things. One of the most important is how much the relentless patriotism and appeals to the flag of late have diminished our ability to be decent and generous to one another and consequently diminished our ability to make art that speaks to our humanity, not merely to our tribe.

David J. Morris is an English Professor at UNLV, a former Marine and the author of The Evil Hours: A Biography of Post-traumatic Stress Disorder(Houghton Mifflin Harcourt, 2015). He will be doing a New York Times-sponsored panel on art and war on Oct 4 at UCSD. Event info here: https://timesevents.nytimes.com/AtWarSanDiego .