Letter From Iraq: The Battle Of Mosul May Signal The Return Of The Decisive Battle

The battle of Mosul, in which the Iraqi Security Forces (ISF) and the U.S.-led coalition defeated the Islamic State of... 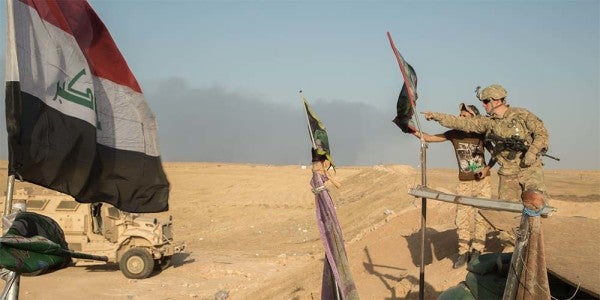 The battle of Mosul, in which the Iraqi Security Forces (ISF) and the U.S.-led coalition defeated the Islamic State of Iraq and the Levant (ISIS), has generated a lot of discussion since its completion in July of last year. The battle, which raged for the nine months (October 2016 to July 2017), provides many opportunities to examine as it relates to modern and future warfare. The battle’s decisiveness and the consequences of that decisiveness are striking to consider.

It is important to note that the ISF consists of more than just the Iraqi army. The ISF included forces from the Ministry of Defense (i.e. army forces), the Ministry of the Interior (i.e. various police forces), the Counter-Terrorism Service (CTS), and the Popular Mobilization Forces (PMF). Units from all components of the ISF participated in the battle, but the standard-bearers were the Iraqi Army’s 9th Division (Armored), the CTS, and units from the Federal Police, to include the 5th Federal Police Division. The PMF, a legally sanctioned wing of the ISF since 2014, has raised some eyebrows because it contains some Iranian-backed militias. It played a significant role in the counteroffensive against ISIS, providing upwards of 16,000 personnel through the battle of Mosul.

Historically, decisive battle was characterized as military action that had a direct impact on the will of military and/or political leaders to continue with a given course of action. In other words, an event was thought to be decisive if it caused leaders to change their plans and pursue a different path. Napoleon Bonaparte’s battle of Austerlitz is an instructive example of a decisive battle—the battle was so disastrous for the Russo-Austrian coalition that both heads of state ceded their political objectives against Bonaparte and accepted his terms of peace.

The Mosul battle was decisive because it resulted in operational and tactical change. Before it, ISIS fought conventionally, seeking to engage the ISF in battles of attrition. In Mosul, ISIS threw everything it had into the fight, in an effort to destroy the ISF and inflict enough collateral damage that the international community and coalition support for the offensive would collapse.

It was not clear as the fight ended in Mosul whether ISIS still had an appetite for large-scale conventional actions. But in the following months it became clear, as ISIS mounted only desultory operations in Tal A’far, Hawijah, and along the Euphrates River Valley. None of those encounters amounted to much than skirmishes. Thus Iraqi Prime Minister Haider Abadi was able to announce in December of last year that that the organization had been militarily defeated.

To be sure, ISIS did not formally accept terms of surrender like that of the Russo-Austrian alliance following its defeat at Austerlitz in December 1805. But it has tacitly acknowledged its defeat by reducing the scale of its operations and tactics, engaging in small-scale guerrilla activities in Iraq. It also is likely has moved its focus to other areas such as North Africa or the Philippines.

Also, the battle of Mosul should not be seen in isolation. Even as it fought in Iraq, ISIS was also engaged in large battles of attrition in Syria. The battles of Raqqa and Aleppo, similar in the scope and scale of Mosul, yielded many of the same results.

Viewed collectively, one can assume that ISIS realized that its twin goals of defeating the ISF and Syrian pro-regime forces, supported by the U.S.-led coalition and Russia, respectively, was no longer a fight it could win. Therefore, the organization adjusted its strategy, operational approach, and its tactics in order to maintain existence. Similar to other efforts to retain and regenerate power, ISIS adopted a strategy of evasion across Iraq and Syria and is employing an economy-of-force to maintain an active posture, while rebuilding itself.

It is also important to note the difference between guerrilla activities and insurgencies. Some observers believe that ISIS has transitioned to an insurgency. However, that view overlooks the political aspect of insurgencies. For a movement to be an insurgency it must seek to overturn an extant political entity; whereas guerrilla action is oriented on an enemy, and does not seek to overturn an existing political institution. ISIS, post-Mosul, seeks to continue to exist as an organization but not to usurp the Iraqi government; this is also appears to be true in Syria given its limited ability to project physical force.

To conclude, it appears that in a period of limited war, decisiveness has returned to the battlefield. The battle of Mosul — a hard-fought win for the government of Iraq and its coalition partners — signaled the end of ISIS’s physical army. While the ideology lives on, the organization’s physical ability to resist was blunted, at least temporarily, in Iraq. The question remains as to whether or not ISIS will pick up the pieces of its shattered empire, and if Iraq and its partners will be able to capitalize on the decisiveness of the battle of Mosul.

Amos Fox is a U.S. Army officer and served as a planner with the Combined Joint Force Land Component Command (CJFLCC)-Operation Inherent Resolve (OIR) and the U.S. Army’s 1st Armored Division in Baghdad, Iraq. The views expressed in this article are those of the author and do not reflect the official policy or position of the Department of the Army, the Department of Defense, or the U.S. Government.