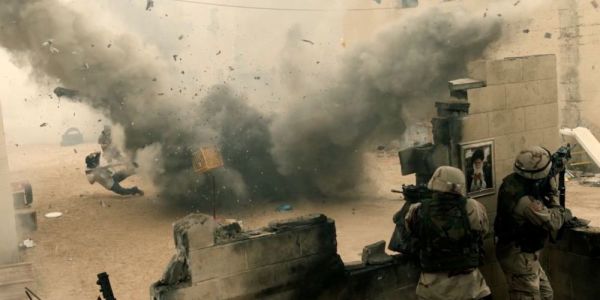 In 2007, news correspondent Martha Raddatz published The Long Road Home describing the events of April 4th, 2004 when 2-5 Cavalry assumed their mission in Sadr City, Iraq in the midst of a horrific ambush. Sadr City had been quiet for a year, the Shia population was waiting to see if the American occupation would work out on their behalf. The Shias had been much abused under Saddam Hussein’s regime and the city was a huge slum.

When the Coalition Provisional Authority, headed by Paul Bremer, made another brilliant decision to shutter the local newspaper for inciting violence against the coalition; the Shia population, under the direction of Moqtada al Sadr, decided to show the coalition what kind of violence they could incite.

A platoon escorting shit-sucking trucks was ambushed and LTC Volesky, the incoming unit commander, was faced with the alarming task of rescuing his surrounded soldiers. The battle raged, some dubious decisions were made, and eight U.S. soldiers died and somewhere between 65 and 70 were injured.

Related: The Soldier Who Led The Way In An Unarmored Humvee In The Battle Of Sadr City »

Raddatz tells a great story, and our own Tom Ricks blurbed both the front and back covers: “[The Long Road Home] shows how American troops sweat, bleed, and fight in the Iraq War. Read it.” I read it back in 2007 and it was one of many books that informed my decision-making when my unit deployed in 2008. One of the merits of the book is that presents the story of what happened to the soldiers and how it impacted their families back at Fort Hood, Texas.

When National Geographic Channel announced they would be hosting an eight-part mini-series adaptation of the book, I was intrigued but I had to save the show until I could give it the attention it deserved. I also re-read the book so I could measure one against the other.

The mini-series admirably adheres to the book and conveys the difficulties the soldiers and their families survived. Given a limited TV budget they did a, mostly, excellent job of building the Sadr City setting. They had substantial U.S. Army equipment support and most of the filming was done on post at Fort Hood. If you watch carefully, with a critical eye, there are moments that pull you out, but most are well done and casual viewers won’t notice. Contrast this with Billy Lynn’s Long Halftime Walk where the setting, uniforms, and equipment were extremely poorly implemented on a much larger big screen budget.

Indeed, only the combat vehicles in The Long Road Home often seem out of place, simply because they probably weren’t allowed to scuff them up too much. More CGI bullet holes, burn marks and body damage would have made up for things. Soldiers use generally decent tactics, though the bigger question of why anyone thought it was a good idea to go into the battle in open LMTVs and unarmored HMMWVs – in a city of 2.5 million possible adversaries – goes beyond the TV show to reality itself. Guess you “go to war with the Army you have, not the one” you were forced to leave back at Fort Hood. (Only M1 tanks could finally break through to the surrounded platoon).

Related: 'The Long Road Home' Is Gritty, Authentic, And Army-Approved »

Each episode is named after one of the prime characters, and provides additional focus on each character, respectively. I found the episodes on interpreter Jassim and enlisted man Tomas Young to be the most moving. Neither story is prominently featured in the book. Jassim’s backstory may or may not be a reality, but Young’s is well known by other means so it’s mostly accurate. An unrealistic scene, where one LMTV and its complement of soldiers is lost and broken down, seems to be included for artistic license. It should have been left on the cutting room floor because it reminded me of the awful Hurt Locker movie.

Acting is merely serviceable throughout. There’s few familiar actors and fewer still reach a level much beyond soap opera quality. Lt. Aguero (E.J. Bonilla) and Sgt. Bourquin (Jon Beavers) acquitted themselves best. The real Bourquin was among the technical advisors for the film. The home front scenes also tend towards soapy material; but it’s treated with more care, far better than Army Wives.

Many of the episodes open with the gut-wrenching views of the overloaded aid station, and its piles of boots, helmets, and equipment. It’s stunning to think how this event is mostly forgotten now, at least by everyone who wasn’t there. The show is still available on On Demand and DVD. I highly recommend watching it.

‘HunterJaeger6’ is an Army Reserve infantry colonel. He’s been to Fort Hood and Iraq. His reviews have absolutely nothing to do with the Department of Defense.