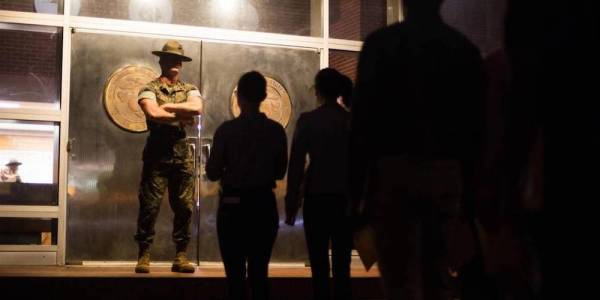 “Get the heck out of here, boy! This meeting is for squad leaders only.”

The year was 2007 and I had just walked into a dimly-lit conference room two weeks after checking into initial military occupational specialty school at Marine Detachment Corry Station, Pensacola, Florida. At that point, I'd been in the Marine Corps for little over four months.

The word, “boy,” hit me like a brick with the entire weight of its historical use towards black men behind it; however, I didn't let the metaphorical slap in the face show. Stunned, I silently took a seat at a center table while our platoon guide (first-level supervisor) explained that I was promoted to squad leader that morning.

This was the first of many overt or oblique racial remarks that I encountered over my 11-years in the United States Marine Corps. And as my career progressed over the next decade, I lost track of how many racist comments, statements, and gestures I've heard from Marines.

As a lance corporal, I listened to a sergeant rant loudly about how black Marines were useless and lazy until he noticed that I was standing in the room.

As a sergeant, I overheard other sergeants stand in formation and call President Obama a “stupid monkey.”

These are just a few of dozens of stories that easily come to mind. And each time, when confronted about their remarks, each Marine uttered the same trite response: “I didn't mean it like that. You know I'm not racist.”

Unfortunately, my stories are not unique. Many black and brown Marines have come forward with their own eerily similar stories, all with the same plot: a white Marine makes a blatant or thinly-veiled racist remark – the Marine is called out – the same phrase is repeated: “I didn't mean it like that. You know I'm not racist.” It's as if there was a script they all shared, some version of the same non-apology.

Now, in 2018, with racial tensions in America at a boiling point, more and more military members are openly advocating white supremacist ideals in their off-duty time. Many military members have even been involved in rallies-turned-violent-clashes like the “Unite the Right” rally in Charlottesville, Virginia. Week-after-week, headline-after-headline, active-duty military members and recently-separated veterans – particularly Marines – are being exposed as white supremacists. Some of these white supremacists are forcibly separated after their beliefs are made public, like Sergeant Michael Chesney and Staff Sergeant Joseph Manning, as well as Lance Corporal Vasillios Pistolis, who recently received a court-martial for his actions in the Charlottesville rally.

Statistically, these cases cannot possibly represent all of the white supremacists in the Marine Corps. Though many Marines would deny it, from personal experience and stories shared by many other Marines of color, it is clear that racism is a persistent and pervasive issue across the Corps. A quick internet search can uncover dozens of reputable articles about Marine veterans who now train white supremacist groups in weapons and tactics. The Marines mentioned earlier were all on active-duty, serving in large units … do their friends from those units share their ideology? How many white supremacists are serving in the Corps right now that we don't know about?

Whether in Officer Candidate School or Recruit Training, Marines are taught one fundamental principle from the beginning of their service: Marines take care of Marines. This principle has led Marines to perform some of the most amazing feats of bravery in military history. From jumping on live grenades thereby risking their lives for fellow Marines, to rushing into enemy territory against all odds, Marines have done the incredible to ensure the safety of others who all proudly wear the title Marine. Borne out of necessity, Marines place a special trust in one another – a trust passed from generation to generation through tradition.

The recent ruling in the case of Pistolis undercuts this core principle. What happens when Pistolis returns to his unit after his time in confinement? It's difficult enough to train and deploy alongside Marines who think casual racism can be compatible with camaraderie, but how can a Marine of color continue in good faith when known white supremacists are allowed to remain in the Corps?

For all Marines to fully trust that “Marines take care of Marines,” there must be clear and decisive action from all levels of Marine Corps leadership, including the Commandant, to demonstrate that racist and bigoted ideologies, actions, and statements will not be tolerated in our Corps. Marines must not be allowed to remain in the service after blatantly participating in racially extremist activities. Otherwise, these are just words.

Dwayne Smith is a former Marine SNCO with more than a decade of service in the intelligence field. He has deployed twice in support of Operation Enduring Freedom and holds an advanced degree in computer science.