An interesting conversation, relayed by Defense Secretary James Mattis at the Virginia Military Institute on Tuesday: I was out in … Continued 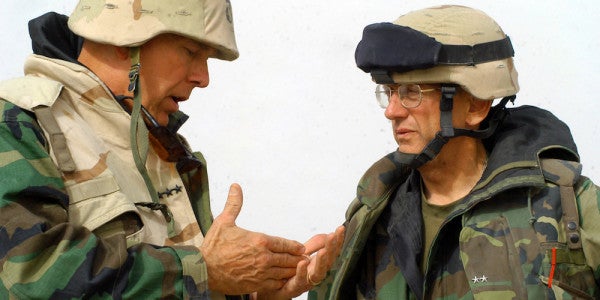 An interesting conversation, relayed by Defense Secretary James Mattis at the Virginia Military Institute on Tuesday:

I was out in the middle of nowhere a few years ago, again with my little team there, rolling down the road. And it was probably, oh, somewhere around 40 to 50 kilometers from the nearest next outpost.

And we pulled in during the night because we had trouble getting there. Got inside this lieutenant's perimeter with about 40 guys out there, sailors and Marines.

And when the sun came up, they came over to see me, check in. And he said, “By the way, General, last night we caught a guy trying to lay an IED on the road you were driving in on.”

I said, “Well, that's kind of nice.” You know. A little personal, you know what I mean? Wanted to blow me up.

He said, “Yeah, he's an engineer and he speaks perfect English, do you want to talk with him?”

So they brought him over to see me. And he was shaking like a leaf, it was not his best night, you know what I mean?

He'd been out there with his wheelbarrow, he had his two artillery rounds, had his car battery, he's got his shovel, he's digging a hole and he looks up and there's five people with automatic weapons dressed in camouflage. And he realized immediately, his retirement plan was in jeopardy at that point.

And so he's shaking badly. He wants a cigarette. I decided not to give him my anti-smoking lecture for a change. He looked like he needed it.

So I had to light it for him. We cut his handcuffs off, little plastic cuffs the Marines put on him.

And I said, “What are you doing this for?” You know? “What's wrong with you?” You know. “You're a Sunni. We're the Marines, we're the only friends you've got out here.”

And he started, you know, going on. “Well, you Jews, you Americans, you want to steal our oil,” and all this stuff. And I said, “OK.” I said, “You're obviously an educated man. I'm not going to waste my time listening to this drivel.”

And he said, “Can I sit here a minute?” I said, “Sure.” And after a minute, he seemed to be a little calmer. We got him a cup of coffee. He's spilling it, he's still nervous.

And I said, you know, “What's up? Where’s your family at,” you know? They lived about 10 kilometers away. He had a wife, two daughters.

And we're talking for a little bit. And he said, “You know, just I can't stand having foreign soldiers here.” I respect that. I wouldn't want foreign soldiers in this town, you know what I mean? I mean, that— that's where you can connect with somebody.

And I said,”Well, I understand but, you know, you shouldn't have done that.” He said, “I guess I'm going to jail.” I said, “Oh, yeah. You're going to be wearing an orange jumpsuit in Abu Ghraib for a good many years for this little stunt.”

And “you're lucky you're not dead for” — you know. And he said, “Yeah.” He says — but, now I want you all, especially you young people, to listen to me here.

He said, “General, do you think if I'm a model prisoner” — you know what's coming, don't you? — “could I someday immigrate to America?”

Think about that. Think about that, that the hatred he felt was so much that he would go out and try to put a bomb in the road to kill us, but the example of America was so strong that if he could be sitting where you are today or have his son and daughter in that audience, he'd have given his eyes or teeth. It wasn't just because we'd caught him right then. This was deeper.

And I was reminded, America's got two fundamental powers. There's the power of intimidation and the military — the U.S. military exists to warn people, “You take on America, and free men and women are going to fight like the dickens.” Power of intimidation.