How Is Mattis Handling The Madness Of The Trump Administration? A Quick Interview With A Pentagon Insider

Here's a conversation I had recently with a guy I've known a long time who works at the Pentagon. No... 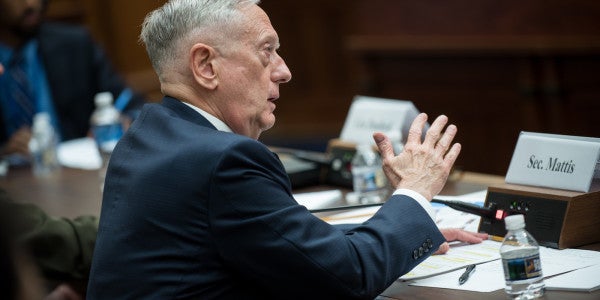 Here's a conversation I had recently with a guy I've known a long time who works at the Pentagon. No great news, but a whiff of the current atmosphere.

Hi! How does the Pentagon nowadays feel differently from the Obama and Bush eras?

My perspective has been different in each period, so I don't know if the context is different or just my seat. I was amazed in early Obama years about lack of interest/time/discussion about ongoing wars inside the Building. The scale of fighting is smaller but the time and research on going fights is higher. A discernible difference I observe is the intensity of concern over chances of major war, readiness challenges from constrained resources, and the larger pressures on security from China, NK, and Russia. The time devoted to Alliance management and relationships also appears much higher.

But in my prior jobs I was into programs/resources. So I was more concerned with budget cycle not external strategy.

My impression is that Mattis has conveyed to people around him to be respectful and professional when dealing with the White House, but not to give up any ground unnecessarily. Is that right?

Mr. Mattis has always set and enforced a climate of decorum in his staff. WRT [With respect to] to WH, the President has delegated authority to his Cabinet. I sense the NSC would like to claw back a lot of the authority and deference the President affords to confirmed Cabinet members.

How does Mattis keep his temper when dealing with people at the White House? Did he ever lose it over the objections to his personnel picks?

I have never observed any problems over personnel picks, I think that was early in process.

We've never before had a White House chief of staff who is a former subordinate to the person who is now the SecDef. How is the Kelly-Mattis relationship doing? How has it changed?

I have noobservations about C/S interacting with the SecDef.

We haven't seen a lot of McMaster-Mattis joint appearances. Why is that? Are they rubbing each other the wrong way?

I've seen them together a lot at WH, six times or so, photos abound, but then I can't recall Susan Rice or Condi Rice appearing with SecDef Gates in external forums either. Perhaps a Reagan Forum??? I think your impression is factually founded, but entirely because Mattis doesn't appear anywhere, or do interviews. He has a pretty low profile for a SecDef.