Mattis Is Pushing The Navy To A Brand New Fleet Strategy 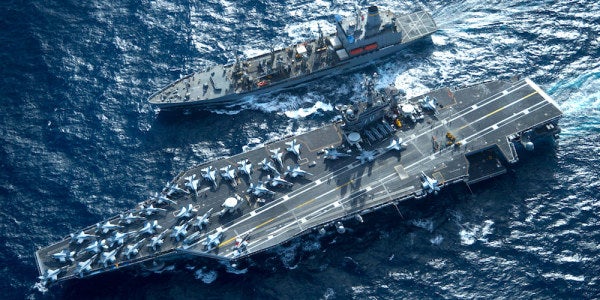 Secretary of Defense James Mattis recently hinted at major changes to how aircraft carrier battle groups are deployed, saying that the current eight-month deployment cycle is “no way to run a Navy.”

Instead, the order of the day is preparation for peer conflict. Deployments scheduled years in advance may be replaced by flexible 90-day tours. “They won’t spend eight months at sea,” Mattis continued in his remarks to the House Armed Services Committee last month. “We’re going to have a force more prepared to surge and deal with high-end warfare as a result, without breaking the families, the maintenance cycles-we’ll actually enhance training time.”

Mattis seems to be bringing his old Marine Corps “Chaos” persona to an organization that’s built a business model on predictability. Training, readiness, and staffing issues aside, what effect would the secretary’s proposed changes have on US Naval Strategy?

The best way to understand the contemplated changes is to see this as a transition from a Mahan-inspired Navy to a Corbett one.

What does that mean? Well, the work of Alfred Thayer Mahan is at the core of our Navy’s culture. It formed the basis for the grand strategy of the US Navy. In particular, his 1890 book The Influence of Seapower Upon History articulated the strategic logic behind a naval building frenzy that took the world by storm. Mahan believed that concentrated battle fleets made up of capital ships on the strategic offensive, based at and supplied by chains of distant colonies, would establish “command of the sea” for the nation’s shipping interests. Unfettered access to foreign markets was won through fleet-on- fleet battle. An enemy fleet’s proper place was trapped in port or on the seafloor. Mahan’s theories paved the way for American holdings in Cuba and the Philippines. Later, colonies were replaced with bases stationed with allies around the world.

Sir Julian Corbett was a British contemporary of Mahan. In Some Principals of Maritime Strategy, published in 1911, he argued that “command of the Sea” was a relative term, as the world’s oceans were too vast to “control.” What could be controlled were lines of communication. The act of passage, then, was more important than outright control. It was better to maintain a presence, then quickly seize temporary control of small areas when needed. Corbett prized maneuver over decisive battle in an overall plan of strategic defense that featured concentrated local offensives and combined operations. Commerce raiding and blockades featured heavily. Capital ships were only one part of the equation. The enemy never needed to be destroyed in the Mahanian sense.

Secretary Mattis’ view of sea power comports more with Corbett’s views than with Mahan’s. Corbett wrote his tome for the Royal Navy, then a long established sea power—as, now, is the U.S. Navy. Defending the status quo in delicate geopolitical situations meant decisive fleet on fleet battles were to be avoided. Corbett’s emphasis upon the operational level and hitting enemies fast and hard where needed fits neatly with Mattis’ views of warfare. While aircraft carriers have long since taken the battleship’s place as the fleet’s capital ship, Corbett’s theories make room for other types of warships to contribute to the mission. Cruise missiles, armed UAVs, and special operations forces make this facet quite attractive.

Reordering the Navy from its Mahanian mindset will be tough. Questioning long-standing philosophies always meets resistance. Mahan’s arguments on decisive battle and absolute control of the sea were made at the time America was a rising sea power, not an established one. This is supported by Mahan’s popularity with new naval powers like China. It’s yet to be seen whether the Navy is unwilling to give up the historic foundation of its mission.

While the specifics of Secretary Mattis’ plans have yet to be announced, the strategic implications are many. Bottom line is, Mattis seems to be gambling that certain regions used to a predictable naval presence will remain stable despite unpredictable rotations. How will allies and opponents react?

Kyle Gaffney received his Master’s Degree in History from William Paterson University. He last wrote for The Long March about Tom’s hero, Gen. William T. Sherman.Follow him on Twitter at @citizenGaffney .