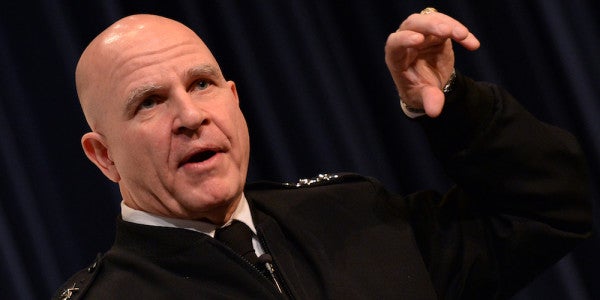 I’ve seen him at war. He has done a lot for his country. He deserved an ending better than this. Trump just smears shit on everyone he comes in contact with. We have a deranged psychopath as president. It makes me grateful that we have constitutional checks and balances. Now we only need Congress to stand on its hind legs.

Here is how that weasel Trump put it: “I am pleased to announce that, effective 4/9/18, @AmbJohnBolton will be my new National Security Advisor. I am very thankful for the service of General H.R. McMaster who has done an outstanding job & will always remain my friend. There will be an official contact handover on 4/9.”

H.R. actually would have made a good advisor to Obama, I think. They would have clashed, intellectually, but each also would have appreciated the spirit brought to the question. Trump didn’t. He wanted loyalty, without question. He couldn’t handle the truth. He’s a punk.

H.R. will be ok. He’ll teach, he’ll write. He won’t go to jail, as will many of the people around Trump and, I think, perhaps Trump himself. I think Jared Kushner especially.

But more than about individuals, I worry today about the nation. This is like having Aaron Burr as president—a selfish, unfeeling, amoral president only in it for himself, and capable of treason. The American republic is a more fragile thing than some people think. I feel like right now we are living in a low-grade oligarchy. This is not where I expected to be in 2018.