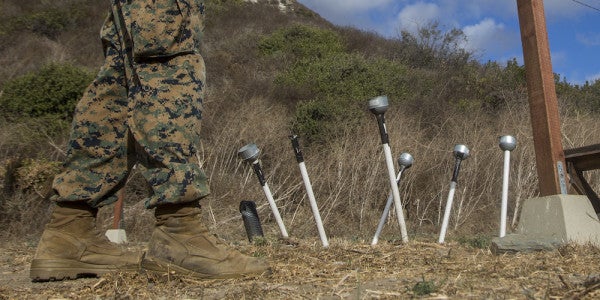 Once upon a time in a little desert as a young 88M Sergeant attached to a Calvary Troop and Infantry Platoon, I found myself in a part of Iraq close to the Syrian border in a tiny Combat Outpost known as COP North. It was not the most distinguished of areas for the glory of battle or for tales of amazing exploits. It was far enough from the flagpole and off the grid that reflective belts were not worn, faces were scraped occasionally but were mostly covered in at least 1/8 inch of hair collecting dust, and when the militia next to us wasn’t shooting at each other they rarely shot at us.

The accommodations were modest–a few GP Medium tents surrounded by slightly overhead height sand berms, a couple mobile guard towers, and a couple Strykers. No Hescos. No concrete barriers. Occasionally we put sand on the top of the berm so snipers couldn’t clip our domes.

We had a generator which meant two glorious things were there too, light bulbs and a couple of portable AC units. Plus, that meant you could charge your MP3 player or DVD player. No TVs, but if you can’t enjoy a movie with 12 other dudes huddled around a 6-inch screen you’re probably just a miserable person anyway. As such creature comforts are game changers in the savage land and provide a taste of civilized life for weary warriors.

We improvised a gym by putting a pickaxe handle in between two connex’s for a pull-up bar and lifting MRE boxes. Had to stay fit to fight with whatever downtime we had. We were preparing for the second Iraqi referendums and conducting dismounted patrols with Jundi counterparts. During the Christmas holidays, the commander’s wife sent exquisite rum balls. Patrolling and chores back at the COP kept us busy. We BBQ'd a lamb. Morale was high.

Then we got the heads up: The chain of command is coming to visit. That meant a lot of changes: Shaved faces; clean uniforms; no more wrestling in the tents; no more sun tanning on cots; no more shirtless Sunday. We all hoped they would bring food with them. We didn’t have any Otis Spunkmeyer cookies out there with us, so anything other than MREs was an exciting prospect.

One thing we did have out there was lovely improvised toilets. We had a 50-gallon drum with a piece of plywood on the top and couple of piss tubes. Piss tubes are PVC pipes shoved into the ground so we could consolidate our urine for good sanitation and field hygiene—and, with time, to create a giant mud puddle of distilled piss.

I awoke one morning completely absent-minded about Higher Command coming to visit but could immediately sense the tension in the air amongst my constituency. As I stepped into the hot sunny day awaiting me outside the tent, I could see all of the clean uniforms and tricked out vehicles parked by the front of our tiny tent village. Customized with all kinds of sweet things like armored automatic turrets and mine rollers and the latest EW tech. During this time that kind of stuff was still not on every vehicle, MRAP’s were not a thing yet so it always really stood out when you saw it on Humvees and LMTV’s.

As I passed by I heard the usual bullshit common when senior leaders descend from their powerful bubbles of ignorance. Stupid shit like, “What do you mean soldiers are sleeping after being on a 12-hour patrol? Didn’t you tell them we were coming?” As if Joe Private Infantryman wants to talk about “how we’re doing in Iraq” after a patrol.

I walked over to the piss tubes. Simultaneously, some colonel I had never seen or met before stood at the next tube.

It was this very strange and quiet moment, where two men of very different rank and position in the great spectacle of war were conducting basic body operations quietly together. My uniform was filthy and I had not showered for over a month. I’m sure the colonel could smell that funk. His uniform looked like it had just been cleaned and pressed.

It was a beautiful sunny day, the wind blew warmly and gently and sand wistfully danced along the top of the dunes. A Black Hawk helicopter flew in the distance. A gunner in the Stryker was pulling security and providing overwatch while we evacuated our waste fluid. It was so quiet all you could hear was the echo of our streams and slight buzzing of flies amplified by the piss tubes. It was a pristine moment.

We never talked but I felt that somehow we both knew we just shared a moment in our personal histories. It was like we both just knew this is ridiculous and nobody will ever understand this kind of moment unless they lived it. We walked away as equals, as peers in a way. He still outranked me and went back to the HQ life. I went back to that COP North life but for the briefest moment, we had stood as equals, as two warriors just living the dream.

Luke Flowers is a 1LT, retired. He is figuring out life out after the Army. He writes, teaches leadership, and is learning to fix boats.