Here’s no. 14 in our contest about finding meaning in work after the military. Tim O’Hair: “I served four years... 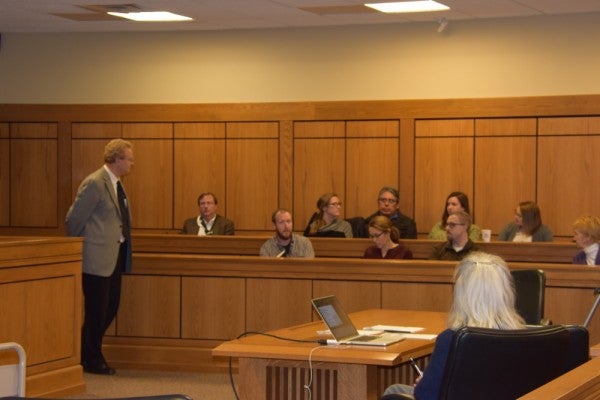 Here’s no. 14 in our contest about finding meaning in work after the military.

Tim O’Hair: “I served four years in the Marine Corps and am now — six years later — in my second year as a prosecutor with a state Attorney General’s office. It took a long time to get there because I only had a bachelor’s degree when I EAS’d, and a low one at that.

Obviously the post-military schooling came first, but I wasn’t going to get into a good law school with my undergrad degree, so I went overseas and did a one-year master’s degree first.

That was a great way to reinitiate myself in academia, improve my law school prospects, and prepare for the rigorous academic setting law school would present. Then, once in law school, I actively sought internships with local and state prosecutor’s offices. I interned in the Attorney General’s office my entire third year of school and was hired upon passing the bar.

In short, I was hired four years after I discharged, but the good news was that the GI Bill paid for everything (including my overseas Master’s degree) — in fact, it paid me $2300 a month while I was in school (BAH). So while it took me some time, I did not accrue significant debt.

Being a prosecutor is just as meaningful to me as my career in the military.

Both careers provided the higher satisfaction of serving something greater than myself. In the military, it was my country. I felt that it was my duty as an able person to give my four years and I knew — even when I was doing what seemed like the most minuscule task — that I was helping this great machine move forward.

And upon exiting the military, I was worried that I would not find something that gave me that same deep sense of satisfaction. Indeed, my initial job offers (when I was debating between going straight to work or going back to school) were warehouse manager positions and sales positions that paid decently but lacked that sense of meaning.

I needed to serve. And being a prosecutor does exactly that but on a local level.

I’ve prosecuted murders, rapes, child molestations, robberies, and many other crimes. The victims are desperately seeking justice. The satisfaction might be confined to a more local purpose, but is much more concrete and immediate. I cannot say which gives me greater satisfaction, but I certainly do not find myself wanting for more meaning in my career.

I feel fortunate to have felt that deep sense of satisfaction now in both careers I have had, although in very different ways.”