It’s Time To Get Yourself A Tethered Drone

Imagine a drone connected to a mobile ground station by a powered tether similar to a dog on a leash.... 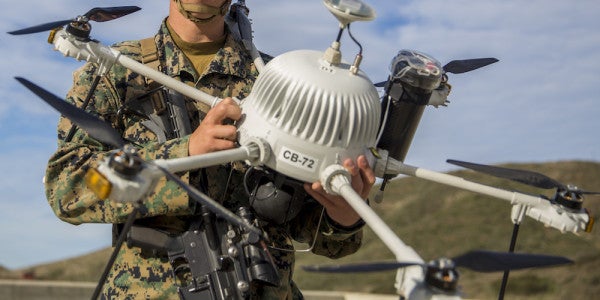 Imagine a drone connected to a mobile ground station by a powered tether similar to a dog on a leash. The ground station would be able to feed the drone (via the tether) electricity and water while also providing its user with persistent surveillance. This type of drone currently exists and could provide the U.S. military, the U.S. Border Patrol, first responders, and others with significant improvements.

Dr. Sergei Lupashin was the individual to get this technology moving. During a demo in a basement of New York University in 2013, he attached a dog leash to an aerial drone. This led to companies such as CyPhy, Fotokite, Aerones, and others to start developing tethered drone technology.

Tethered drones offer the unique ability of nearly unlimited flight time, but more importantly, it offers a more cost-effective way to use drone technology. Tethered drones are powered from the ground while sensors and surveillance in the air leads to a wide variety of different payload options.

Here are four examples of who could use this technology.

Although this technology could provide significant improvements in nearly every industry, just as with any new technology, there are downsides and disadvantages. For example, even though tethered drones could improve operational reach in the U.S. military, it lacks in maneuverability as the length of the tether is limited when compared to a traditional drone not tethered to a ground source. Another downside or disadvantage is that (although highly mobile) an enemy could capture the drone by simply capturing its ground source. This could be a significant issue depending on what type of data is stored in the drone.

If the U.S. military were to use this technology then it might find a highly mobile and cost-effective alternative to traditional and expensive drones. As discussed in Understanding Drones, large military drone systems, such as the Global Hawk costs approximately $30,000 per flight hour. Tethered drones offered by companies such as Fotokite offer tethered drone technology under $300 for its most cost-effective drone – as discussed in “Fotokite’s foldable, tethered Phi flying camera arrives for $249.”

Lastly, if the U.S. military were to use this technology, then they would have to identify a way for the drone to release the tether if an enemy were to attempt to capture its ground source. Although this is a concern, it should be easy to identify a solution.