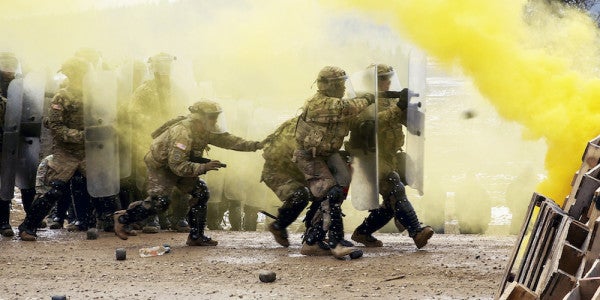 From about 2003 to 2016, again and again, we found ourselves going down the same green ramp to the same planes to the same landing strips on the other side of the world where people wanted to kill us and where life is as dangerous on Day 1 as on Day 364.

But it’s also dangerous on Day 366 and Day 475 when you get back home and you don’t know how to act around your friends and family. You feel for your weapon and freak out that it’s not on your hip. You swerve around trash in the road and avoid Wal-Mart like the plague. You only know how to do what you’ve done every other year for the last 10 to 15 years. Your brain operates in the 5-paragraph frago op order fashion and anything not fitting that description must not be important.

People who don’t understand all that begin to fade from the forefront of your sight picture. Sleep is a novelty, not a necessity. Necessities? Those are numbing agents — alcohol, oxy, pictures or friends who shared the experience. Mention the name of a fallen and the room damn well better go silent and rise in reverence.

This is the life of a soldier who has spent time in Mosul, Fallujah, Patika or Basra. It doesn’t matter if you were sent to kick in doors or haul water, type up casualty reports or bounce satellite signals. There are no lines drawn on today’s battlefield and IEDs, mortars and sniper rounds do not discriminate.

But your war is not over once you’ve offloaded that freedom bird. No, in some ways it’s just begun. You’re saddled with this cultural cognitive dissonance between being the badass warriors your service tells you should be and the voice inside your head’s dashboard that’s saying “warning – engine overheating.” For a couple of tours, we just go to the unit physician’s assistant and get them to override the dashboard lights. But that can only last so long before the engine actually catches fire. And then, Houston, we really do have a problem.

Our warrior culture is not set up to recognize seeing problems short of losing a body part or blood gushing from an orifice. The “invisible wounds,” as they’ve been called in this war, are the hardest ones to see, explain and validate in the eyes of leaders who often dismiss warriors as malingering because they cannot see the wounds the warrior tries to describe. This makes their wounds a self-licking ice cream cone and the warrior gives up and goes back in the game playing hurt.

Over time the hurt warrior falls further down the dark rabbit hole, losing more and more hope that circumstances will ever change. Maybe somewhere along this spectrum they leave the service or maybe they remain. But the finality of letting their hope go MIA is why so many warriors take their own lives. In this state, they are not in their right minds any longer and probably haven’t been for some time. At some point they have surrendered that this is their fate and they can find no way out other than ending things. That is why they choose death.

In my first tour in Iraq as a senior major, I ran Casualty Operations for (MNC-I) Iraqi theater. My team and I were responsible for all the reports that left Iraq as well as the all the letters of condolence and sympathy that came from then-General Petraeus and Lt. Gen. Odierno. We had 884 KIA’s and we’ll over 10K WIA in our 15-month tour.

Every morning at 7am, my first task of the day was to walk to the command group and hand the generals a 5×8 card with the previous day’s carnage and then to answer any questions they had about the carnage that occurred. Sometimes my NCO and I would fly out to the field hospitals to fill in for our troopers there so they could go on R&R; and we’d witness the carnage first-hand. It was certainly enough to make you question the cost the United States was paying in American blood. At the end of the tour, I came home.

Thirteen months later, I was back in Iraq doing almost the exact same job. I never talked about the nightmares and anxiety with anyone because I saw how we treated soldiers who spoke up, much less leaders. I was coming into zones of consideration for promotion and command and I didn’t want to let that be a black mark. How silly is that — asking for help?

I know I’ve let my hope go MIA numerous times throughout my experiences; some more recently than I’d like to admit. We as a community have to find a way to make this a safe place where hurting people can ask for help and not get chastised for it.

I most recently was the Garrison Commander for Fort Belvoir, the fifth largest post in the Army. After a year and a half I needed to step down because my PTSD issues need to be addressed full-time. Your career doesn’t get to come back from that. The stigma is still there. I’ll be medically boarded and will be medically retired within the year. The good news is I got the help I needed. The bad news is I should have done it 12 years ago.

But this is about way more than an old crusty colonel.

The biggest issue is the volume of people going through this is so vast and the shortage of clinical staff to support these issues are so few. I know the Army has begun to put Behavior Health Specialists at brigade levels (I am not sure how the other services are handling this). But a team of 2 or 3 for 3,000 to 4,000 people may not be sufficient for the task, given the sheer volume of people we have shoved through the deployment mill for the last 16 years. There is no way possible to close the gap at present with trained professionals. We have got to find a way to use a better buddy system to triage until we can get these warriors into professional care. Their lives literally hang in the balance.

The VA system is even more bleak with over 30,000 vacancies among clinicians. Behavior clinician vacancies hover around 5,000. The problem with VA is the backlog to hire and background checks and this doesn’t even begin to address the access to care issues that are so prominent in the headlines to day.

All of these factors are creating an epidemic among warriors who are already on the edge. I usually am an optimistic person — at least, I used to be — but I fear that if we do not change current course, knowing how many OEF/OIF veterans will be separating in the next 5 to 10 years, we have not yet seen the high water mark of suicides.

Col. Angie Holbrook is a human resources officer in the Army. She deployed twice to Iraq, from November 2006 to February 2008, and from July 2009 to July 2010. This article represents her own personal views, which are not necessarily those of the U.S. Army.